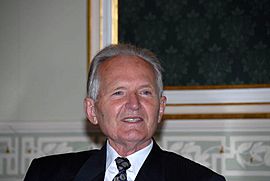 Jože Toporišič (October 11, 1926 – December 9, 2014) was a Slovene linguist. He was the author of the most influential Slovene scientific grammar of the second half of the 20th century. He was a member of the Slovenian Academy of Sciences and Arts, and coauthor of the Academy's Slovene Normative Guide. He started teaching at the University of Ljubljana and became the founding father of modern Slovene linguistics.

He was born in Mostec, near Brežice in Slovenia and died in Ljubljana, Slovenia, aged 88. In 2015, the primary school in Dobova, next to the village where Toporišič was born, was renamed Dr. Jože Toporišič Primary School.

All content from Kiddle encyclopedia articles (including the article images and facts) can be freely used under Attribution-ShareAlike license, unless stated otherwise. Cite this article:
Jože Toporišič Facts for Kids. Kiddle Encyclopedia.