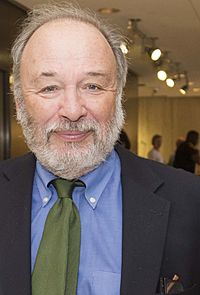 Klein at the LBJ Presidential Library and Museum in 2016

Joe Klein (born September 7, 1946) is an American political columnist, writer, critic, historian and journalist. He works for Time magazine and is known for his novel Primary Colors.

Klein is currently a member of the Council on Foreign Relations and is a former Guggenheim Fellow. He has also written articles and book reviews for The New Republic, The New York Times, The Washington Post, Life, and Rolling Stone.

Klein was born in New York City to a Jewish family. He was raised in New York City and in New Rochelle, New York. Klein studied at the University of Pennsylvania. In 1967, he married Janet Eklund. They divorced in 1975. They had 2 children. He is now married to Victoria Kaunitz. They have two children.

All content from Kiddle encyclopedia articles (including the article images and facts) can be freely used under Attribution-ShareAlike license, unless stated otherwise. Cite this article:
Joe Klein Facts for Kids. Kiddle Encyclopedia.