Charles Joseph Scarborough ( born April 9, 1963) is an American cable news and talk radio host. He is currently the co-host of Morning Joe on MSNBC and previously hosted Scarborough Country on the same network. Scarborough was previously a lawyer and a politician and served in the United States House of Representatives from 1995 to 2001 as a Republican for the 1st district of Florida.

Scarborough is also a visiting fellow at the Harvard Institute of Politics at the Harvard Kennedy School of Government. He was named in the 2011 Time 100 as one of the most influential people in the world.

Charles Joseph Scarborough was born in Atlanta, Georgia, he has two siblings. Scarborough graduated from Pensacola Catholic High School in Pensacola, Florida. He earned a Bachelor of Arts degree from the University of Alabama in 1985 and a Juris Doctor degree from the University of Florida College of Law in 1990. During this time he wrote music and produced CDs with his band, Dixon Mills, including the album "Calling on Robert E. Lee", and he also coached football and taught high school. 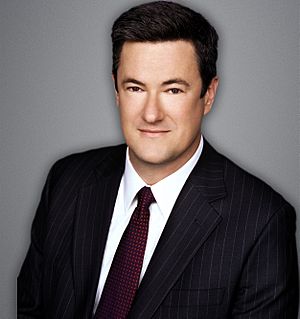 Scarborough currently resides in New Canaan, Connecticut, an affluent suburb near New York City. In early 2017 during a trip to Antibes, France, he became engaged to his co-host Mika Brzezinski.

All content from Kiddle encyclopedia articles (including the article images and facts) can be freely used under Attribution-ShareAlike license, unless stated otherwise. Cite this article:
Joe Scarborough Facts for Kids. Kiddle Encyclopedia.