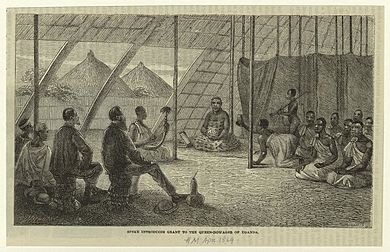 Johann Baptist Zwecker (1814–1876) was a German illustrator of books and magazines.

Zwecker studied art in Düsseldorf and Frankfurt, Germany. Around 1860 he set up a studio in London with Joseph Wolf.

He illustrated children's books including Hans Christian Andersen's The Ice-Maiden (Richard Bentley, 1863), as well as tales of adventure such as African Hunting and Adventure... by William Charles Baldwin. He also worked for magazines. He is however best known for his artwork for natural history books including Alfred Russel Wallace's The Geographical Distribution of Animals. His greatest work was to illustrate John George Wood's Popular Natural History (Routledge, 1871) in three volumes.

Among his works are The Hartebeest, 1862; Arrival at the Depôt at Cooper's Creek, 1862; Ostrich Hunting, 1862; and A Race for Life in a Jungle, 1862. He produced the first surviving image of the Icelandic Fjallkonan ('lady of the mountains'). 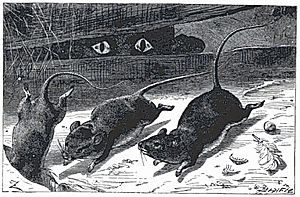 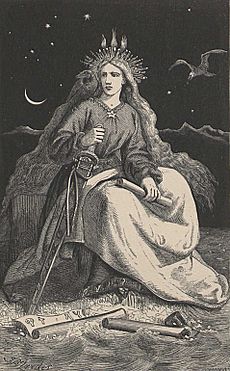 "The lady of the mountain" (Fjallkonan), a symbol of Iceland, frontispiece to Jón Árnason's Icelandic Legends, 1866

All content from Kiddle encyclopedia articles (including the article images and facts) can be freely used under Attribution-ShareAlike license, unless stated otherwise. Cite this article:
Johann Baptist Zwecker Facts for Kids. Kiddle Encyclopedia.