The John A. Green Estate (also known as the Green-Nissen Estate) is a historic property in Stone City, Iowa, United States. The estate covers 200 acres (0.81 km2) of land. The buildings were constructed of Anamosa Limestone quarried from John Green's own local business. The estate was individually listed as a historic district on the U.S. National Register of Historic Places in 1978. It was included as a contributing property in the Stone City Historic District in 2008.

On March 17, 1868, then a lonely spot in the wilderness, now the site of Stone City, Iowa, John A. Green opened the Champion quarries. For nearly fifty years, the quarries produced steadily, amounting to more than 4.5 billion dollars in sales. 1896 records indicate 1,000 men were employed among the quarries, carving 160,000 loads of stone in a single year with a market value of 3.75 million dollars. In his most productive years (1869-1890s), John Green operated three quarries (known as "Champion 1," "Champion 2," and "John Allen") using nearby Anamosa State Penitentiary labor.

In 1883 Green built a three-story hotel and opera house complex on his estate known as Columbia Hall. It was made of 500,000 tons of stone. The theater offered some of the most well known entertainers of the day. Columbia Hall was purchased in the 1930s and torn down in 1938 to use the stone elsewhere.

In 1920 200 acres (0.81 km2) of the Green Estate was purchased by Frank Nissen. During the summers of 1932 and 1933 the estate became the location of Stone City Art Colony. In 1932, Grant Wood, Edward Rowan, and Adrian Dornbush established the Colony. With little more than $100 and a number of promissory notes based on the success of the art colony they leased 10 acres (40,000 m2) of land on the estate. The parcel of leased land included the Green Mansion, the Ice House and Water Tower. The upstairs portion of the mansion was converted into a dormitory. The rest of the house was used for business offices, kitchen, a sculpture studio and showers for the men. The basement of the ice house was made into a bar called The Sickle and Sheaf where instructor/student Dennis Burlingame tended bar. The upper portion of the water tower was converted into an apartment where Adrian Dornbush lived, called Adrian's Tomb. 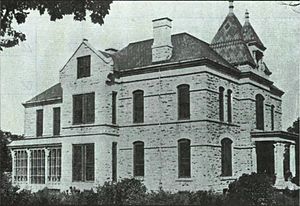 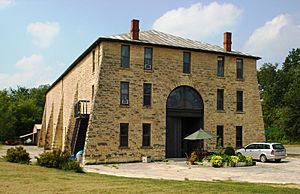 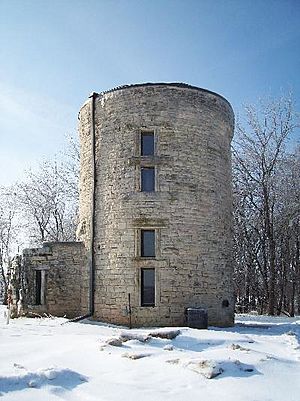 All content from Kiddle encyclopedia articles (including the article images and facts) can be freely used under Attribution-ShareAlike license, unless stated otherwise. Cite this article:
John A. Green Estate Facts for Kids. Kiddle Encyclopedia.