Colonel John C. Hunton (January 18, 1839 - September 4, 1928) was an American Confederate veteran, pioneer and rancher. He was the founding president of the Wyoming Pioneer Association.

John C. Hunton was born on January 18, 1839 in Madison County, Virginia. During the American Civil War of 1861–1865, he served in the 7th Virginia Infantry of the Confederate States Army. He was also in Pickett's Charge during the Battle of Gettysburg. Later in life, he became known as "Colonel" Hunton.

After the war, Hunton worked in freighting in Missouri and Nebraska until 1867, when he moved to the Wyoming Territory and became a clerk to the post-trader at Fort Laramie. From 1888 to 1890, he took over as the post-trader.

Hunton established a ranch along the Chugwater Creek in Bordeaux, Wyoming, where he raised cattle. He was the first president of the Wyoming Pioneer Association. He was also "an authority on Indian warfare," and a diarist. 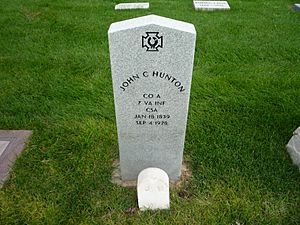 Hunton died on September 4, 1928 in Torrington, Wyoming. He was buried in the Lakeview Cemetery in Cheyenne, Wyoming. In 2010, the United Daughters of the Confederacy added a Confederate marker to his grave.

All content from Kiddle encyclopedia articles (including the article images and facts) can be freely used under Attribution-ShareAlike license, unless stated otherwise. Cite this article:
John C. Hunton Facts for Kids. Kiddle Encyclopedia.