John George Bartholomew (22 March 1860 - 14 April 1920) was a British cartographer and geographer. Because he had a royal warrant, he used the name "Cartographer to the King". He is also known as "the Prince of Cartography."

Bartholomew is best known for naming the continent Antarctica, which before was ignored because of its lack of resources and bad weather. 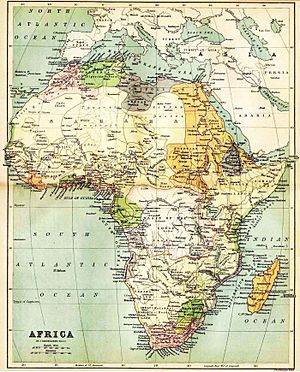 Bartholomew helped make John Bartholomew and Son Ltd. one of the best in the business. During this time, he also introduced the use of colored contour layer maps; he also helped future travelers by making many maps of major cities, railroads, and so on.

Under his administration the family business became one of the top operations in its field. Bartholomew himself was not merely a specialist in production, but also a talented geographer and cartographer. It was he who introduced the use of coloured contour layer maps; he also anticipated the needs of late nineteenth and early 20-century travellers by publishing street maps of major cities, cycling maps, railway timetable maps, and road maps for automobiles.

He worked with major scientific figures and travelers on projects involving their studies. During his life, he worked on an Atlas of Meteorology and Atlas of Zoo geography, however, he never finished. Before he died he was able to plan out the first edition of the Times Survey Atlas of the World; which would later become the most successful atlas project of the twentieth century.

Bartholomew received the Victoria Research Gold Medal and Helen Carver medal. He was also put in the Royal Geographical Society.

All content from Kiddle encyclopedia articles (including the article images and facts) can be freely used under Attribution-ShareAlike license, unless stated otherwise. Cite this article:
John George Bartholomew Facts for Kids. Kiddle Encyclopedia.