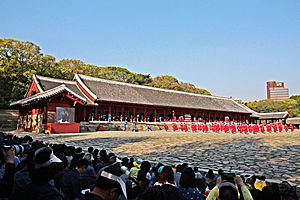 A crowd watches the Royal Shrine Ritual at Jongmyo.

Jongmyo Shrine is a religious building in Seoul, South Korea. It is a Confucian royal shrine from the Joseon Dynasty. It was built in the late 1300s, destroyed during a Japanese invasion in the 1500s, and rebuilt in the 1600s. People still use it in modern times.

The Jongmyo Shrine holds spirit tablets, each dedicated to a specific king or queen from the Joseon Dynasty. The Confucian way of life includes ancestor worship. During the Joseon Dynasty, the king of Korea would go to Jongmyo to pray to earlier kings and queens. There were also larger rites, with more people. Some of them involved singing and dancing. Some of these rites are still performed in modern times.

The layout of the shrine was planned very carefully to complement and work with the hills and other natural structures around it.

Jongmyo has a main shrine, called Jeongjeon. It has a smaller shrine called Yeongnyeongjeon, or "the Hall of Eternal Peace" in English. It also has a place specifically for the king, a storage building for ritual items, and a waiting area. There is also a specific shrine to King Kongmin from the earlier Koryo Dynasty. That shrine was built by the Joseon-era King Taejo. 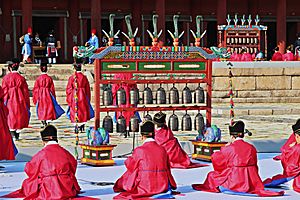 The music played during the Royal Shrine Ritual is important intangible cultural heritage.

Jongmyo was named a UNESCO World Heritage Site in 1995.

All content from Kiddle encyclopedia articles (including the article images and facts) can be freely used under Attribution-ShareAlike license, unless stated otherwise. Cite this article:
Jongmyo Facts for Kids. Kiddle Encyclopedia.