Jordan Galland is a singer-songwriter and an award winning movie-maker from New York City. He has worked with Sean Lennon, and Mark Ronson 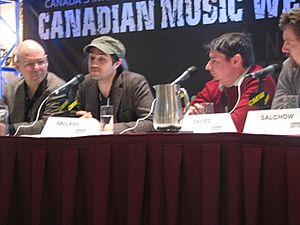 Jordan and band mate Domino Kirke were part of a feature modeling clothing in a contest featuring up and coming clothing designers.

All content from Kiddle encyclopedia articles (including the article images and facts) can be freely used under Attribution-ShareAlike license, unless stated otherwise. Cite this article:
Jordan Galland Facts for Kids. Kiddle Encyclopedia.