Jorge Manrique (Paredes de Nava, Palencia, or Segura de la Sierra, Jaén, c. 1440 Santa María del Campo, Cuenca – 24 April 1479) was a major Castilian poet, whose main work, the Coplas a la muerte de su padre (Verses on the death of Don Rodrigo Manrique, his Father), is still read today. He was a supporter of the great queen, Isabel I of Castile, and actively participated on her side in the civil war that broke out against her half-brother, Enrique IV, when the latter attempted to make his daughter, Juana, crown princess. 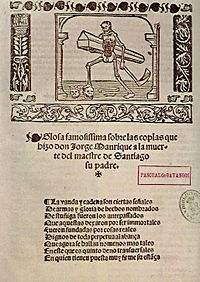 First page of the Coplas by Jorge Manrique

Jorge died in 1479 during an attempt to take the castle of Garcimuñoz, defended by the Marquis of Villena (a staunch enemy of Isabel), after Isabel gained the crown.

Manrique was a great-nephew of Iñigo López de Mendoza (marquis of Santillana), a descendant of Pero López de Ayala, chancellor of Castile, and a nephew of Gómez Manrique, corregidor of Toledo, all important poets of the late fourteenth and fifteenth centuries. He was, therefore, a member of a noble family of great literary consequence.

All content from Kiddle encyclopedia articles (including the article images and facts) can be freely used under Attribution-ShareAlike license, unless stated otherwise. Cite this article:
Jorge Manrique Facts for Kids. Kiddle Encyclopedia.