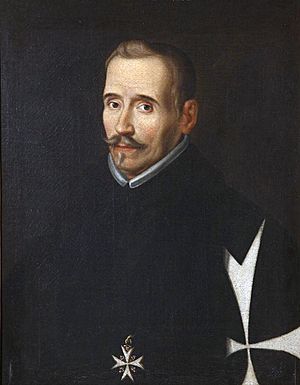 Lope de Vega (also Félix Lope de Vega y Carpio or Lope Félix de Vega Carpio) (25 November 1562 – 27 August 1635) was a Spanish Baroque playwright and poet. His reputation in the world of Spanish letters is second only to that of Cervantes, while the sheer volume of his literary output is unequalled: he is estimated to have written between 1,500 and 2,500 fully-fledged plays – of which some 425 have survived until the modern day – together with a plethora of shorter dramatic and poetic works.

He was "The Phoenix of Wits" and "Monster of Nature" by Miguel de Cervantes because he did so much work. Lope de Vega renewed the Spanish theatre when people were becoming interested in it. Along with Calderón de la Barca and Tirso de Molina, he improved Spanish theater. He is considered a great dramatist and his plays are often performed. He is also one of the famous Spanish poets and authors.

Lope de Vega was born in Madrid to a non-notable family, who came to the capital from Valle de Carriedo in Cantabria recently. Félix de Vega, the bread winner of the family, was an embroiderer.

All content from Kiddle encyclopedia articles (including the article images and facts) can be freely used under Attribution-ShareAlike license, unless stated otherwise. Cite this article:
Lope de Vega Facts for Kids. Kiddle Encyclopedia.