José Alencar Gomes da Silva (October 17, 1931 – March 29, 2011) was a Brazilian businessman and politician who served as the Vice President of Brazil from January 1, 2003 to January 1, 2011. In business from a young age, Alencar became a self-made multimillionaire as the chief executive of Coteminas, a leading textile manufacturer. In the 1990s, Alencar groomed his son to succeed him at the company.

He opted to enter politics in his home state, Minas Gerais. Alencar had a business-oriented political platform, advocating market liberalization and deregulation of production. His expensive political campaigns received hefty funds from Coteminas. After a failed run in 1994 for governor of Minas Gerais, he won the election in 1998 as Senator representing his home state.

In 2002, Alencar was invited by the left-wing Workers' Party to run for Vice President on the same ticket as Luiz Inácio Lula da Silva. The alliance between the leftist union leader and Alencar, an experienced entrepreneur, proved successful. They won the presidential elections in 2002 and were re-elected in 2006. Over the years, Lula da Silva and Alencar developed a close and affectionate friendship.

Alencar came to be revered among journalists and politicians for his spirited personality and friendly demeanor. He overcame his lack of formal education. Based on his business success, he argued in favor of lower taxes, especially indirect taxation over consumers, and a simpler tax system; lower interest rates and greater oversight of the banking industry; and social welfare and assistance programs.

As Vice President, Alencar sometimes spoke out against his own government's orthodox policies, causing embarrassment for fellow administration members. His unwavering determination to live in the face of terminal cancer also marked public perception, during and after his time in office. 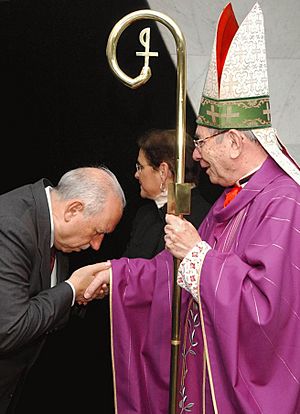 Alencar kissing the hand of Cardinal Freire Falcão, the archbishop of Brasília

Alencar was born into a family of small entrepreneurs from Muriaé, in the inland state of Minas Gerais. He was the eleventh son of Antônio Gomes da Silva and Dolores Peres Gomes da Silva. As a child, he was a Boy Scout.

He started working while still a child, dropping out of primary school to help his father in the family business. He worked with his older brothers for years before becoming an independent successful businessman. For a time he worked as a travelling salesman and in food wholesale start-ups.

After getting established, Alencar married Mariza Gomes in 1957. They had three children together. Their son took over the presidency of Coteminas after his father went into politics. 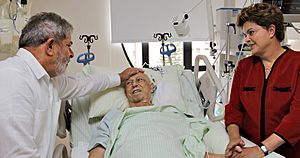 On a routine check-up, José Alencar was diagnosed with stomach and kidney cancer in 1997. After undergoing treatment for some length of time, he had his right kidney and two-thirds of his stomach surgically removed. Five years later, a malignant tumor in his prostate was removed. As the disease had metastasized, it continued to spread, and in 2006 doctors discovered a sarcoma in his abdomen. He was treated for digestive hemorrhage in December 2010 with urgent surgery, his last as Vice President. Doctors could not remove the tumors in his abdomen because of the number of operations to which he had already been subjected – eighteen in all. Alencar received chemotherapy for many years. He was mostly treated at Hospital Sírio-Libanês, in São Paulo. He also received experimental treatment at the M.D. Anderson Cancer Center in Houston, Texas.

Alencar died in late March 2011, in the city of São Paulo, after 13 years battling metastasized cancer. His death was met with expressions of grief and respect by members of different institutions and across the political spectrum – former President Lula said he knew "few men with José Alencar's goodness and spirit" and President Rousseff said it was an "honor" to have served alongside him. Brazil held a state funeral for José Alencar, and Vice President Michel Temer decreed seven days of official mourning. Alencar is remembered as an honest and independent politician who favored social welfare and economic freedom.

All content from Kiddle encyclopedia articles (including the article images and facts) can be freely used under Attribution-ShareAlike license, unless stated otherwise. Cite this article:
José Alencar Facts for Kids. Kiddle Encyclopedia.