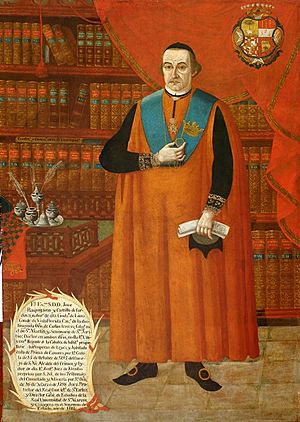 José Javier de Baquíjano y Carrillo de Córdoba, III Count of Vistaflorida (March 12, 1751, Lima, Peru—January 24, 1817, Seville, Spain) was a Spanish/Peruvian economist and jurist, writer and politician, and one of the first great intellectuals of the Viceroyalty of Peru.

Baquíjano inherited the Vistaflorida title from his older brother in 1809, becoming 3rd Count of Vistaflorida.

Baquíjano earned a doctorate in law from the University of San Marcos in Lima. In 1773-76 he traveled to Spain, where he met Pablo de Olavide and Gaspar Melchor de Jovellanos. Upon his return to Peru, he took on the task of protector of the Indigenous, and became a professor of law.

He was celebrated for his speech welcoming the new viceroy Agustín de Jáuregui to Lima in 1780. This was published in 1781 as El elogio a Jáuregui, and was mixed with strong criticism of the viceregal government. His veiled attack on the economic and Indigenous policy of Visitador (Royal Inspector) José Antonio de Áreche was unprecedented. He quoted Montesquieu, Raynal, Machiavelli y Las Casas in defense of his positions. Áreche called his doctrines "execrable". The Argentine Balthasar Maciel attempted a rebuttal of the speech.

Baquíjano was a mercantilist economic thinker, although he was also influenced by the English economist Josiah Child, a qualified exponent of free trade. Baquíjano believed that free trade and the separation of the Viceroyalty of Río de la Plata were the causes of the economic crisis in Peru at the end of the eighteenth century. He supported the position that the Peruvian economy depended on the export of precious metals.

He led a reformist group at the University, arguing for the replacement of Scholasticism with the thought of men such as Descartes, Newton and Juan Heinecio. This group also supported the Encyclopedists and freedom of the press. In 1783 Baquíjano lost an election for rector. Thus he was not able to put his reforms into effect in the University, but he did so in the Colegio de San Carlos. He became vice-rector of San Marcos in 1791.

From 1791 to 1795 he was editor of the Mercurio Peruano, which rejected the radicalism of the French Revolution. In the Mercurio, Baquíjano published histories of the Audiencia of Lima, of the University, and of the mines in Potosí, as well as a dissertation on the economy of Peru. In 1793 he became president of the Sociedad Académica de Amantes del País (Academic Society of Lovers of the Country).

All content from Kiddle encyclopedia articles (including the article images and facts) can be freely used under Attribution-ShareAlike license, unless stated otherwise. Cite this article:
José Baquíjano y Carrillo, Count of Vistaflorida Facts for Kids. Kiddle Encyclopedia.