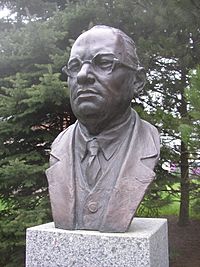 Bust of Josef Lada in Hrusice

Josef Lada (born 17 December 1887 in Hrusice, Bohemia – 14 December 1957 in Prague, buried at Olšany Cemetery) was a Czech painter, illustrator and writer. He is best known as the illustrator of Jaroslav Hašek's World War I novel The Good Soldier Švejk, having won the Deutscher Jugendliteraturpreis in 1963.

The asteroid 17625 Joseflada has been named after him.

Born in the small village of Hrusice in a cobbler's family, he went to Prague at the age of 14 to become an apprentice binder. Entirely self-taught, he created his own style as a caricaturist for newspapers, and later as an illustrator. He produced landscapes, created frescoes and designed costumes for plays and films. Over the years he created a series of paintings and drawings depicting traditional Czech occupations, and wrote and illustrated the adventures of Mikeš, a little black cat who could talk.

All content from Kiddle encyclopedia articles (including the article images and facts) can be freely used under Attribution-ShareAlike license, unless stated otherwise. Cite this article:
Josef Lada Facts for Kids. Kiddle Encyclopedia.