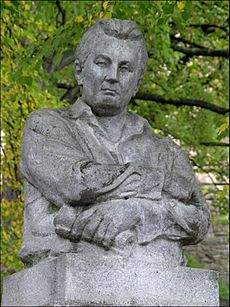 Jaroslav Hašek ( 30 April 1883 – 3 January 1923) was a Czech writer, humorist, satirist, journalist, bohemian and anarchist. He is best known for his novel The Good Soldier Švejk, an unfinished collection of farcical incidents about a soldier in World War I and a satire on the ineptitude of authority figures. The novel has been translated into about 60 languages, making it the most translated novel in Czech literature. 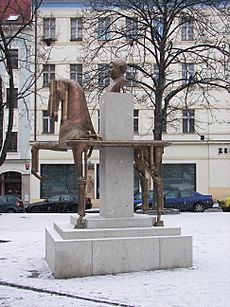 Statue of Jaroslav Hašek in Žižkov, near the pubs where he wrote some of his works

All content from Kiddle encyclopedia articles (including the article images and facts) can be freely used under Attribution-ShareAlike license, unless stated otherwise. Cite this article:
Jaroslav Hašek Facts for Kids. Kiddle Encyclopedia.