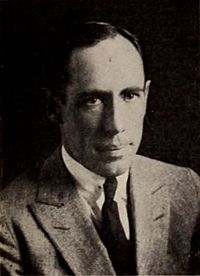 Joseph Henabery (January 15, 1888 – February 18, 1976) was an American actor, screenwriter, and director. He was born in Omaha, Nebraska. Henabery was best known for his role of Abraham Lincoln in D.W. Griffith's controversial 1915 silent movie The Birth of a Nation.

All content from Kiddle encyclopedia articles (including the article images and facts) can be freely used under Attribution-ShareAlike license, unless stated otherwise. Cite this article:
Joseph Henabery Facts for Kids. Kiddle Encyclopedia.