The Joseph Meyerhoff Symphony Hall, often referred to simply as the Meyerhoff, is a music venue that opened September 16, 1982, at 1212 Cathedral Street in the Mount Vernon neighborhood of Baltimore, Maryland, United States. The main auditorium has a seating capacity of 2,443 and is home to the Baltimore Symphony Orchestra. It is named for Joseph Meyerhoff, a Ukrainian-Jewish Baltimore businessman, philanthropist, and arts patron who served as president of the Baltimore Symphony from 1965 to 1983. 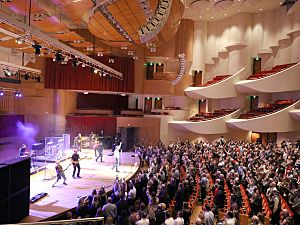 Interior of the Hall 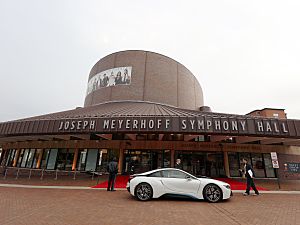 The modern style structure was designed by the architectural firms of Pietro Belluschi, Inc. and Jung/Brannen Associates. Ground was broken November 10, 1978. Acoustical design was by Bolt, Beranek and Newman and uses a series of convex curves to avoid flat surfaces or ninety-degree angles inside the hall.

The auditorium ceiling ranges from a height of 44 ft (13 m) above the stage to 62 ft (19 m) at the rear wall. The walls of the stage are covered in a light-colored wood and feature box seats. Suspended above the stage originally were 52 precast concrete "clouds" which helped diffuse sound. In 1990, management added an extensive set of sound diffusers to improve the sound that the musicians heard on stage. These were removed as unsatisfactory after several seasons, and replaced in 2001 as part of a renovation project. The five-year project began in 1997 and also included a new stage lighting system, new stage risers and equipment lift, expanded storage and performer dressing rooms, increased patron washrooms and improved access for patrons with physical disabilities.

In addition to the main auditorium, the facility includes the John Gidwitz Recital Hall, reception and meeting rooms and administrative offices.

The idea of a new home for the Orchestra was first raised in 1969 by then conductor Sergiu Comissiona and executive director Joseph Leavitt. The orchestra's home at the time was the Lyric Opera House and frequent scheduling conflicts forced the musicians to rehearse in school gymnasiums and prepare for concerts in dark and cramped backstage areas of the Opera House. Major funding for construction came from a donation by Meyerhoff and grants from the State of Maryland and City of Baltimore.

At the opening concert, Comissiona led the Orchestra in a world premiere performance of Housewarming by Morton Gould which was commissioned for the occasion. Other works on the program included Symphonic Variations by César Franck featuring pianist Leon Fleisher and Ein Heldenleben by Richard Strauss

All content from Kiddle encyclopedia articles (including the article images and facts) can be freely used under Attribution-ShareAlike license, unless stated otherwise. Cite this article:
Joseph Meyerhoff Symphony Hall Facts for Kids. Kiddle Encyclopedia.