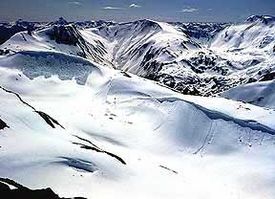 View of the Juneau Icefield

The Juneau Icefield is an ice field located just north of Juneau, Alaska, continuing north through the border with British Columbia, extending through an area of 3,900 square kilometres (1,500 sq mi) in the Coast Range ranging 140 km (87 mi) north to south and 75 km (47 mi) east to west. The icefield is the source of many glaciers including the Mendenhall Glacier and the Taku Glacier. The icefield is home to over 40 large valley glaciers and 100 smaller ones. The Icefield serves as a tourist attraction with many travellers flown in by helicopter for quick walks on the 240-to-1,400-metre (790 to 4,590 ft) deep ice and the massive, awe-inspiring moist crevasses. The icefield, like many of its glaciers, reached its maximum glaciation point around 1700 and has been in retreat since. In fact, of the icefield's 19 notable glaciers, the Taku Glacier is the only one presently advancing. Much of the icefield is contained within the Tongass National Forest. Since 1948, the Juneau Icefield Research Program has monitored glaciers of the Juneau Icefield. On the west side of the icefield, from 1946-2009, the terminus of the Mendenhall Glacier has retreated over 700 metres (0.43 mi). 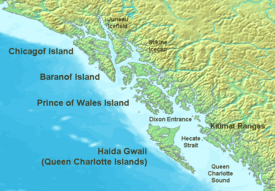 All content from Kiddle encyclopedia articles (including the article images and facts) can be freely used under Attribution-ShareAlike license, unless stated otherwise. Cite this article:
Juneau Icefield Facts for Kids. Kiddle Encyclopedia.