Kairshasp N. Choksy belongs to the small, yet well established and respected, Parsi community of Sri Lanka, of which he was the Anjuman former chairman. He was born in Colombo on 7 February 1933. His paternal grandparents had migrated to Colombo from Surat, North of Bombay, in the year 1885 to manage an established business house in the Coconut oil industry at Colombo, belonging to a Bombay Parsi family.

He entered the Sri Lanka Parliament in February 1989 as a nominated Member on the National List.

He held office in Parliament as Minister for Constitutional Affairs and State Affairs from 1993 to 1994, and thereafter as the Country's Minister of Finance of Sri Lanka from 2001 to 2004. Choksy was a Member of Parliament from 1989 to 2010 continuiosly. 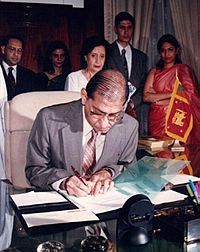 Choksy married Freny (née Cooper) from Bombay.They had three sons. The eldest, Jamsheed, is Professor of Central Eurasian Studies and History and Director of Middle Eastern Studies. He is a scholar in Zoroastrianism and has published several books on religion. The second son, Khursheed, is Executive Director at the United States Chamber of Commerce in Washington. The third son, Vishtasp, has taken to the family tradition of the Law and practices as a Lawyer in Colombo, the third generation of Choksys to excel in his chosen profession.

All content from Kiddle encyclopedia articles (including the article images and facts) can be freely used under Attribution-ShareAlike license, unless stated otherwise. Cite this article:
K. N. Choksy Facts for Kids. Kiddle Encyclopedia.