Kāʻanapali is a census-designated place (CDP) in Maui County, Hawaiʻi, United States. The population was 1,250 at the 2010 census. The master-planned town is located in the Old Hawaii ahupuaa of Hanakao`o, as in the same name of the southern end of Kaanapali Beach's Hanakao`o Canoe Beach. 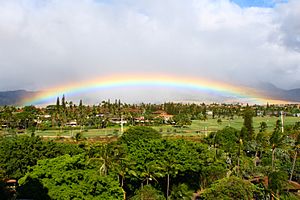 Rainbow on the grounds of the Royal Lahaina Hotel

There were 537 households out of which 20.5% had children under the age of 18 living with them, 59.4% were married couples living together, 7.3% had a female householder with no husband present, and 29.1% were non-families. 16.6% of all households were made up of individuals and 6.0% had someone living alone who was 65 years of age or older. The average household size was 2.56 and the average family size was 2.73.

Amfac, Inc. started to develop Kaanapali Beach Resort in the 1960s, on mile-long Kāʻanapali Beach on the western shore of Maui, a couple miles north of the old whaling town of Lahaina. Since that time, many more hotels and condos have been built both on Kāʻanapali Beach and for several miles up and down the coast, and Lahaina has turned into a tourist shopping area.

Major resort hotels now on Kāʻanapali Beach (in order from the south end closest to Lahaina to the north end) are the Hyatt Regency Maui (opened in 1980), Maui Marriott (opened 1982, now turned into timeshares), Westin (originally opened as the Maui Surf in 1971, then rebuilt as the Westin 1987), Kaanapali Beach Hotel (1964), Sheraton Maui Resort & Spa (1963 but completely rebuilt in 1996), Royal Lahaina (1962), and Maui Kaanapali Villas (originally a Hilton when it opened in 1963).

There are also condominium complexes on Kaanapali Beach. Toward Lahaina between the Marriott and the Westin is the Alii. Moving further north on Kaanapali beach between Whalers Village (shopping center) and the Kaanapli Beach Hotel, is the Whaler. On the north side of Kaanapali Beach (north of Black Rock) there are two new complexes. The Westin Ka'anapali Ocean Resort Villas is a vacation ownership resort, with South Phase opened in September 2003 and North Phase opened in July 2007. The Honua Kai condominium complex is just south of the Aston Mahana condominiums (formerly ResortQuest Hawaii) and Ka'anapali Beach Club.

All content from Kiddle encyclopedia articles (including the article images and facts) can be freely used under Attribution-ShareAlike license, unless stated otherwise. Cite this article:
Kaanapali, Hawaii Facts for Kids. Kiddle Encyclopedia.