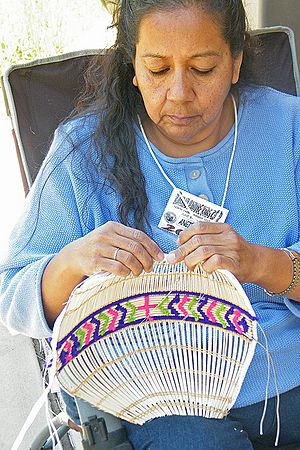 The Kaibab Indian Reservation is the home of the Kaibab Band of Paiute Indians (Southern Paiute Language: Kai'vi'vits), a federally recognized tribe of Southern Paiutes. The Indian reservation is located in northern part of the U.S. state of Arizona. It covers a land area of 188.75 square miles (488.9 km2) in northeastern Mohave County and northwestern Coconino County adjacent to the southern Utah border. The Pipe Spring National Monument lies in the southwestern section of the reservation. The Thunder Mountain Pootseev Dark-sky preserve is colocated with the reservation.

As of the census of 2000, there were 196 people, 65 households, and 49 families residing on the reservation. The population density was 1 inhabitant per square mile (0.39/km2). There were 88 housing units at an average density of 0.5/sq mi (0.19/km2). The racial makeup of the reservation was 23.5% White, 66.8% Native American, 4.6% from other races, and 5.1% from two or more races, with no persons identifying as Black or African American, Asian, or Pacific Islander. 10.2% of the population were Hispanic or Latino of any race.

There were 65 households, out of which 61.5% had children under the age of 18 living with them, 36.9% were married couples living together, 32.3% had a female householder with no husband present, and 24.6% were non-families. 23.1% of all households were made up of individuals, and 1.5% had someone living alone who was 65 years of age or older. The average household size was 3.02 and the average family size was 3.49.

The reservation is served by the Fredonia-Moccasin Unified School District.

All content from Kiddle encyclopedia articles (including the article images and facts) can be freely used under Attribution-ShareAlike license, unless stated otherwise. Cite this article:
Kaibab Indian Reservation Facts for Kids. Kiddle Encyclopedia.