Kailua is a census-designated place (CDP) in Hawaiʻi County, Hawaii, United States, in the North Kona District of the Island of Hawaiʻi. The population was 11,975 at the 2010 census. It is the center of commerce and of the tourist industry on West Hawaiʻi. Its post office is designated Kailua-Kona to differentiate it from Kailua located on windward side of Oʻahu island, and it is sometimes referred to as Kona in everyday speech. The city is served by Kona International Airport, located just to the north in the adjacent Kalaoa CDP. Kailua-Kona was the closest major settlement to the epicenter of the 2006 Hawaiʻi earthquake. 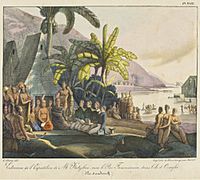 The community was established by King Kamehameha I to be his seat of government when he was chief of Kona before he consolidated rule of the archipelago, and it later it became the capital of the newly unified Kingdom of Hawaiʻi. The capital later moved to Lāhainā, then, to Honolulu. Royal fishponds at Kaloko-Honokōhau National Historical Park were the hub of unified Hawaiian culture. The town later functioned as a retreat of the Hawaiian royal family. Up until the late 1900s, Kailua-Kona was primarily a small fishing village. In the late 20th and early 21st centuries the region has undergone a real estate and construction boom fueled by tourism and investment.

Kona has a tropical, semi-arid climate (Köppen BSh) with warm temperatures year-round, typical of its latitude in the tropics. It is the warmest place in the United States of America in January on average. The coolest month is February, with a daily average temperature of 74.6 °F (23.7 °C), while the warmest is August, with a daily average of 81.0 °F (27.2 °C). In addition to being the warmest place in the United States in January, it is also the is the city with the highest record low in the United States with an all-time low temperature of 56F. Humidity is generally between 50% and 70%. Kona is generally dry, with an average annual precipitation of 32.05 inches (814.07 mm.) Mornings are typically clear while thermal clouds created in the day raise the temperature during the day.

Vog can cover parts of the Kona coast from time to time depending on the activity of the Kilauea volcano and the island winds. Kailua-Kona is located on the leeward side of the Hualalai Volcano sheltering the town from wind and rain. 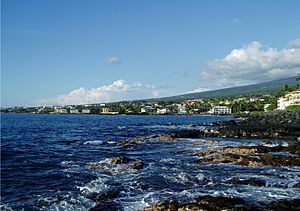 There were 3,537 households out of which 35.0% have children under the age of 18 living with them, 49.6% were married couples living together, 13.6% had a female householder with no husband present, and 31.3% were non-families. 22.6% of all households were made up of individuals and 7.2% had someone living alone who was 65 years of age or older. The average household size was 2.78 and the average family size was 3.26.

Kailua is the start and finish of the annual Ironman World Championship triathlon, the annual Kona Coffee Festival, and the Hawaiian International Billfish Tournament.

Kona coffee is the variety of Coffea arabica cultivated on the slopes of Hualālai and Mauna Loa in the North and South Kona Districts.

Ali'i Drive, Kailua's oceanfront downtown street, starts at Kailua Pier. It has also been given the designation as a Hawaii Scenic Byway called the "Royal Footsteps Along the Kona Coast". This byway offers archaeological sites that have survived over hundreds of years. Kailua Pier is the starting and finishing point for the Ironman World Championship Triathlon in October. North of the pier is the Kamakahonu royal residence and Ahuʻena Heiau. Another royal residence is Huliheʻe Palace, used by members of the Hawaiian royal family until 1914. The Historic Kona Inn and other shops are on the street. Churches on the drive include Mokuaikaua Church, Hawaiʻi's first Christian church built in 1820, and Saint Michael the Archangel Catholic Church. Parks include Laʻaloa Bay (also known as Magic Sands or White Sands Beach) and Kahaluʻu Bay, which has some of Hawaii's best snorkeling. 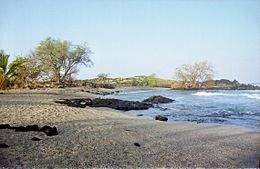 The boat tours to swim with dolphins, watch whales, and do fishing in the ocean usually depart from Honokohau Harbor.

All content from Kiddle encyclopedia articles (including the article images and facts) can be freely used under Attribution-ShareAlike license, unless stated otherwise. Cite this article:
Kailua, Hawaii County, Hawaii Facts for Kids. Kiddle Encyclopedia.