Karin Enke started her sport career as a figure skater at the club SC Einheit Dresden. Representing East Germany she came in ninth place at the European Figure Skating Championships in 1977. Later she changed to speed skating. Dominant on all distances (being reigning World Allround Champion and World Sprint Champion, and having won German Single Distance Championships titles on all five distances in 1983), Enke was the favourite for all four distances at the 1984 Winter Olympics of Sarajevo, but she won "only" two gold and two silver medals. At the World Cup, Enke had 21 single-distance victories, but won only one overall World Cup. She retired from speed skating after the 1987–88 season.

Like several other female East German skaters who got married after the season had ended (and several of them more than once over the course of their careers), Enke caused some confusion among the speed skating public when she—a skater with a name unfamiliar to them—suddenly won major titles in her "first" season. To alleviate the confusion, Enke kept her maiden name as the first part of her last name after her third marriage, just like Gunda Kleemann (also known as Gunda Niemann and Gunda Niemann-Stirnemann) kept Niemann (the name of her first husband) as the first part of her last name even after her divorce and both before and after her second marriage, which is unusual in most Western European countries.

On 3 January 2010, Giselher Spitzer, a German sport historian and researcher of the Humboldt University of Berlin, claimed in the Dutch TV documentary Andere Tijden ('Other Times') that back in 1984, Karin Enke had been prepared with doping. He based his claim on Stasi-documents, which were shown during the programme. Citation: "[Dem Arzt] war bekannt, dass Karin ENKE zu den Olympischen Spielen zu den ausgewählten Athleten gehörte, die mit erheblichen Mengen Testosteron und gleichzeitigen Gegenspritzen von Epitestosteron auf ihre Wettkämpfe vorbereitet würden." ("It was known to the medic, that Karin ENKE at the Olympic Games belonged to those athletes who were prepared for the Games with relevant measures of Testosteron and, synchronously, with contrasting measures of Epitosteron."). 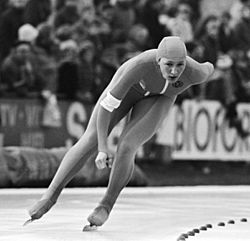 Karin Enke at the European Championships in 1983

An overview of medals won by Enke at important championships she participated in, listing the years in which she won each:

Over the course of her career, Enke skated 10 world records:

All content from Kiddle encyclopedia articles (including the article images and facts) can be freely used under Attribution-ShareAlike license, unless stated otherwise. Cite this article:
Karin Enke Facts for Kids. Kiddle Encyclopedia.