Karl Wallenda ( January 21, 1905 – March 22, 1978) was a German-American high wire artist and founder of The Flying Wallendas, a daredevil circus act which performed dangerous stunts, often without a safety net. He was the great-grandfather of current performer Nik Wallenda.

Wallenda was born in 1905 in Magdeburg, Germany, the son of Kunigunde (Jameson) and Engelbert Wallenda. He began performing with his family at age six. 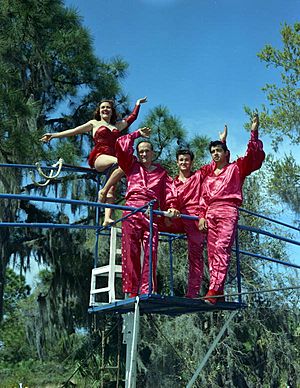 The Great Wallendas were noted throughout Europe for their four-man pyramid and cycling on the high wire. The act moved to the United States in 1928, performing as freelancers. In 1947 they developed the unequaled three-tier 7-Man Pyramid. Karl Wallenda had the idea since 1938, but it took until 1946, when he and his brother Hermann developed it and had the right acrobats for it. The Great Wallendas, a 1978 made-for-TV movie starring Karl Wallenda, depicts the act's comeback after a fatal accident involving several family members during a performance. Wallenda was killed in a high wire accident just 38 days after it was first broadcast.

Despite being involved in several tragedies in his family's acts, Wallenda continued with his stunts. In 1978, at age 73, Wallenda attempted a walk between the two towers of the ten-story Condado Plaza Hotel in San Juan, Puerto Rico, on a wire stretched 121 ft (37 metres) above the pavement. As a result of high winds and an improperly secured wire, he lost his balance and fell during the attempt. Wallenda was pronounced dead after his body arrived at the hospital. This was not viewed on most television stations, but a film crew from local station WAPA-TV in San Juan taped the fall with narration by anchorman Guillermo José Torres.

All content from Kiddle encyclopedia articles (including the article images and facts) can be freely used under Attribution-ShareAlike license, unless stated otherwise. Cite this article:
Karl Wallenda Facts for Kids. Kiddle Encyclopedia.