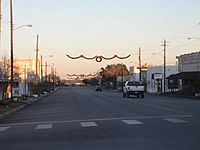 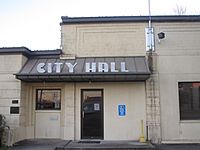 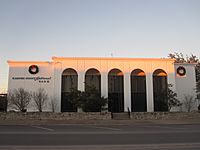 Karnes City National Bank is across from City Hall.

Karnes City is a city in Karnes County, Texas, United States. The population was 3,042 at the 2010 census. It is the county seat of Karnes County. The town was named after Henry Karnes of the Texas Revolution. Karnes is some twenty-five miles south of Floresville on U.S. Highway 181.

In 1894, as a result of a special election, the county seat was moved from Helena to Karnes City. Colonel William G. Butler (1831–1912) blamed the town and its corrupt mayor for the death of his son, Emmett, who was killed on December 26, 1884, by a stray bullet from a bar fight. When the townspeople would not identify Emmett's killer, Butler reportedly shouted: "All right! For that I'll kill the town that killed my son!" Following through on his threat, Butler, a veteran of the American Civil War and a wealthy rancher, arranged for the since defunct San Antonio and Aransas Pass Railway to be built 7 mi (11 km) bypassing Helena. Then, in a bitterly contested election, the county seat was moved to Karnes City, and Helena faded away into a ghost town.

According to the United States Census Bureau, the city has a total area of 2.1 square miles (5.4 km2) all land.

Karnes City is about 60 miles (97 km) southeast of San Antonio.

There were 1,007 households out of which 35.8% had children under the age of 18 living with them, 46.7% were married couples living together, 19.3% had a female householder with no husband present, and 28.5% were non-families. 25.2% of all households were made up of individuals and 14.8% had someone living alone who was 65 years of age or older. The average household size was 2.81 and the average family size was 3.37.

The climate in this area is characterized by hot, humid summers and generally mild to cool winters. According to the Köppen Climate Classification system, Karnes City has a humid subtropical climate, abbreviated "Cfa" on climate maps.

All content from Kiddle encyclopedia articles (including the article images and facts) can be freely used under Attribution-ShareAlike license, unless stated otherwise. Cite this article:
Karnes City, Texas Facts for Kids. Kiddle Encyclopedia.