Karpenisi is a town in central Greece. It is the capital of the regional unit of Evrytania. Karpenisi is situated in the valley of the river Karpenisiotis, a tributary of the Megdovas, in the southern part of the Pindus Mountains. Mount Tymfristos (2,315 m elevation) lies directly to the north of the town, and the foothills of mount Kaliakouda are in the south. Karpenisi has a ski resort and is a popular destination, especially during winter. It is called Switzerland of Greece for the resemblance with the mountainous country and its beauty, atypical for a Mediterranean place. 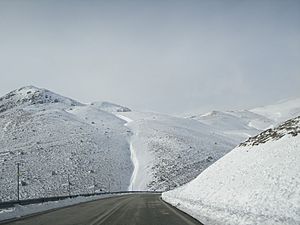 This in a market town in the middle of Roumeli. The chief attraction, in fact, is the Karpenisi Ski Centre eight miles out of town on Mount Velouhi, perched nearly 6,000 feet above sea level at a spot called Diavolotopos – literally, Devil’s place. This centre has ten pistes, seven ski lifts, a number of restaurants and first aid facilities, and a stunning view of a good part of the central Greek mountain tops that has been compared to the view from near the top of Mont Blanc.

Most of Greece is arid and dry but in Karpenisi there is much greenery and forestation. While far away from the sea and the world renowned islands of the Aegean and Ionian, Karpenisi has become an important ski center and an outdoors person’s play ground. In fact during the summer it is a great place to escape the heat.

All content from Kiddle encyclopedia articles (including the article images and facts) can be freely used under Attribution-ShareAlike license, unless stated otherwise. Cite this article:
Karpenisi Facts for Kids. Kiddle Encyclopedia.