Kauaeranga Visitor Centre is an information centre run by the Department of Conservation. It accepts payment for camping at the numerous campsites further along the road, and organises accommodation at two cottages next to the centre. The centre is 13 kilometres from Thames on Kauaeranga Valley Road. The road is sealed to this point, and gravel for the remaining 9 kilometres. Short walks, day tramps and multi-day tramps start from the road beyond the centre.

The Pinnacles Walk is a tramp from the end of Kauaeranga Valley Road to the summit of a volcanic plug, 759 metres above sea level. The return tramp takes eight hours and is often done over two days.

The local iwi, Ngāti Maru, called the area Waiwhakauaeranga ("waters of the stacked jaw bones") in memory of a battle after which they piled the jaw bones of their enemies on the side of the river.

The valley was a rich source of kauri timber, and numerous dams and several tramlines were built to facilitate harvesting in the late 19th and early 20th centuries.

In some parts of the valley, farms were established with five lots made available in 1880. Lack of roads and severe weather made farming difficult, so land was allowed to revert to bush. There was little farmed land left by the late 1960s.

Residents first requested that the Auckland Education Board establish a school in the valley in 1896, but the Kauaeranga Valley School did not open until 1903. The initial roll was 30 students. By 1946, with the road to Thames having improved and many children going to school there, the roll had fallen to seven, and the school closed.

A post and telegraph office opened in 1903 The Post Office closed in 1953, with rural delivery taking its place. A telephone office operated from the closure of the post office until 1955, when an automatic exchange would have rendered it uneccessary.

The Kauaeranga Valley Dairy Company opened a factory in November 1907 to produce milk and butter. It closed in September 1908 and moved to Parawai, where it was defunct by 1910.

A road between Thames and Tairua was proposed in 1909, with the recommended route going through the Kauaeranga Valley, up the Piraunui Valley, across the Hihi saddle, and down the third branch of Tairua River. In 1926, a track was created over this route, and the following year, 100 men started work to convert it to a road, but the work was abandoned later that year. After the Second World War, a route further south along the Kirikiri Stream gained favour, and the road which is now State Highway 25A was built from 1961, opening to traffic in March 1967.

From 1957, an electric power line was built from Thames, through the Kauaeranga Valley and north to Coroglen. This was complete by 1959. 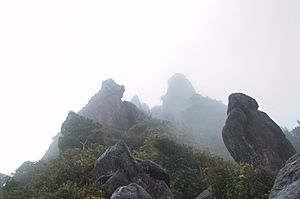 The Pinnacles in Kauaeranga Valley

The proportion of people born overseas was 15.3%, compared with 27.1% nationally.

All content from Kiddle encyclopedia articles (including the article images and facts) can be freely used under Attribution-ShareAlike license, unless stated otherwise. Cite this article:
Kauaeranga Valley Facts for Kids. Kiddle Encyclopedia.