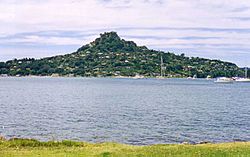 The town of Tairua is on the east coast of the Coromandel Peninsula in the North Island of New Zealand. It lies at the mouth of the Tairua River on its north bank and on the small Paku Peninsula. The population was 1,227 in the 2013 Census, a decrease of 42 from 2006. Tairua is a Māori name which translates literally as tai: tides, rua: two.

Directly opposite Tairua on the south bank of the river's estuary is the smaller settlement of Pauanui. The two settlements are 30 kilometres east of Thames although the town has closer connections with the sea side resort town Whangamata. Several islands lie off the mouth of the river, notably Slipper Island to the southeast and the Alderman Islands 20 kilometres to the east. Mount Paku is an extinct volcano that lies by Tairua Harbour. It was thought to have formed the Alderman Islands.

The earliest occupation of the area was once thought to have been by early Polynesian explorers based on the discovery of a pearl-shell (not native to New Zealand) lure shank found here and originally carbon-dated to the 11th century. Subsequent reassessment of the archaeological site has resulted in dates in the 14th century

Early European settlers to the area, in the late 19th century, were primarily drawn by timber stocks (predominantly kauri) and gold prospecting.

From the late 1960s Tairua has become a holiday destination, with major activities including game fishing, diving, and surfing.

Radio Tairua is an independent radio station on frequency 88.3FM, which has broadcast to the area since May 2007.

All content from Kiddle encyclopedia articles (including the article images and facts) can be freely used under Attribution-ShareAlike license, unless stated otherwise. Cite this article:
Tairua Facts for Kids. Kiddle Encyclopedia.