Keiraville is a heritage-listed detached house at 20 Roderick Street, Ipswich, City of Ipswich, Queensland, Australia. It was built c. 1880s. It was added to the Queensland Heritage Register on 9 July 1993. 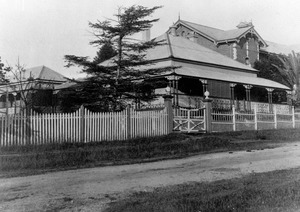 Keiraville built for the Cribb family at Ipswich

Keiraville is a single storeyed rendered masonry house, the first stage of which was probably erected c. 1880s by contractor John MacKenzie. Soon after it was sold to the Cribb family. In 1938, it was sold to the Congregational Church for use as a manse. 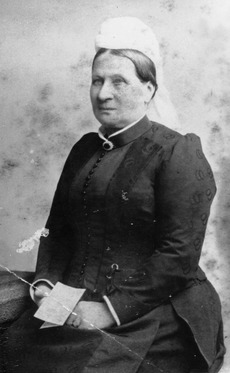 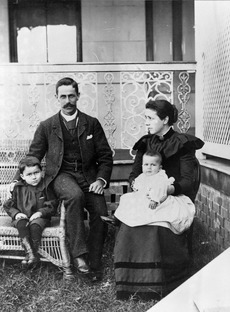 Allotment 5 on which the house is erected was first proclaimed a town lot in 1884. It was sold in that year to John MacKenzie. In 1888, Clarissa Cribb purchased the allotment, together with the adjoining allotment 4 on the corner of Roderick Street and Warwick Road. The house was lived in by her son Harry Cribb and his wife until 1895. Harry, of the local firm Cribb and Foote, was a well known sportsman and it may have been at this time that the tennis court was erected on allotment 4. In 1891, the property was transferred to Clarissa Spence, the eldest daughter of Clarissa Cribb. Subsequently the property was owned by various members of the Cribb family. From 1913 until the 1920s the house was lived in by Harry's son, Gordon and his family. Gordon was known as a naturalist and erected aviaries in the grounds. In 1919, the property was transferred to Gordon and in 1923, returned to Clarissa Spence. A photograph dated c. 1920s shows a detached building to the rear to the rear of the house. Sometime after this, a wing was added to the south east.

The house adjoined the site of the Congregational Church Hall. For some 50 years Kieraville was used as the manse. In 1983, the house became the headquarters for the Blue Nurses. A carpark was constructed on the tennis court site. In 1992, a new wing was added to the rear of the building involving alterations to the house. The house is now used by Lifeline. 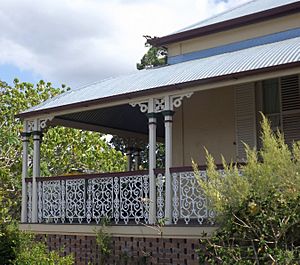 Keiraville is a single-storeyed rendered masonry house with a corrugated iron pyramid roof and timber verandahs on three sides. It has two wings forming a U at the rear of the building which adjoin a new brick extension. It is one of a group of three buildings on the Uniting Church site, being located in the well-treed north-eastern portion.

The verandah has paired timber posts with square capitals and decorative timber valances. It is covered by a curved corrugated iron roof, and has a wrought iron balustrade. The northern Roderick St elevation has a small front yard and a modest entrance (currently not used) consisting of rendered masonry stairs and a timber arch spanning between posts which has the words "The Manse" are inscribed upon it. This northern elevation has timber louvred shutters, while the west and east elevations have glazed timber doors with glazed fanlights above. The building sits on a brick screen base. Two tall rendered masonry chimneys and a metal ventilator rise above the ridge of the roof.

The house has a simple square plan with four rooms around a central corridor. It has timber boarded ceilings throughout, some with metal ceiling roses. The north-east and south-west rooms have fireplaces with timber mantelpieces.

The rendered masonry former kitchen wing is attached to the south-western corner of the main house, and has a hipped roof, and a brick chimney. The south-eastern wing is single skin timber with externally exposed framing, and contains two rooms which may have served as accommodation. The verandah to this wing has been enclosed. The space between the wings has been roofed and enclosed, and now links directly to a new brick extension.

The major alterations to Keiraville have focused on the rear of the building, and when viewed from Roderick Street, Keiraville remains an intact late nineteenth century residence in form and detail. Much of the interior detail of the house also remains intact. 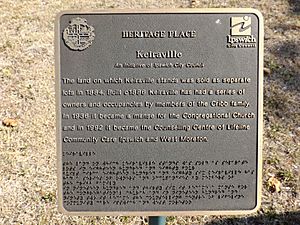 Keiraville was listed on the Queensland Heritage Register on 9 July 1993 having satisfied the following criteria.

Keiraville is important in demonstrating the development of Ipswich, which is part of the pattern of Queensland's history.

It demonstrates the principal characteristics of a late 19th century residence and makes a picturesque contribution to the streetscape.

It demonstrates the principal characteristics of a late 19th century residence and makes a picturesque contribution to the streetscape.

All content from Kiddle encyclopedia articles (including the article images and facts) can be freely used under Attribution-ShareAlike license, unless stated otherwise. Cite this article:
Keiraville, Ipswich Facts for Kids. Kiddle Encyclopedia.