Waston made his professional debut for Saprissa in 2006 and played on loan for Carmelita in the Primera División de Costa Rica before moving abroad for a six-month loan spell with Club Nacional de Football in the Primera División Uruguaya from February 2008. In March 2010, Waston signed a three-month loan deal with Bayamón of the Puerto Rico Soccer League to help the club qualify for the CONCACAF Champions League. He later had three more loan spells, one at UCR and two at Pérez Zeledón. In May 2012 Waston returned to Deportivo Saprissa to be part of the first team.

On 8 August 2014, Vancouver Whitecaps FC announced a deal that they had acquired the defender from Saprissa. Waston joined the first team in the midst of their 2014 MLS season.

On 25 October 2014, Waston scored the only goal in the Whitecaps' final game of the regular season, heading in a corner kick from Pedro Morales, sending the Whitecaps to the playoffs for the second time in their four years since joining MLS. The impact that Waston had on the Whitecaps' season after joining the club earned him a nomination for MLS Player of the Month for October. Waston played his 100th MLS game for the Whitecaps on 26 May 2018, against San Jose. He signed a new contract before the 2018 season, becoming a designated player under league rules. Waston was the captain of Vancouver Whitecaps, having been named so before the 2017 MLS season.

On 11 December 2018, Waston was traded to FC Cincinnati ahead of their inaugural season in MLS. Vancouver received $450,000 of General Allocation Money, $300,000 of Targeted Allocation Money and an international roster spot. Waston captained the team for the majority of the 2019 MLS season. He was released by Cincinnati at the end of their 2020 season. 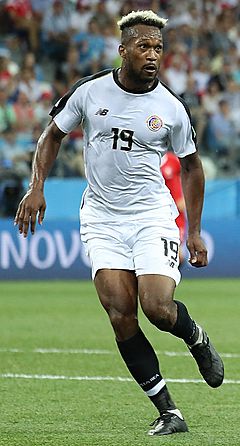 Waston with Costa Rica at the 2018 FIFA World Cup

He made his senior debut for Costa Rica in a May 2013 match against Canada and earned, as of December 2014, one more cap in a 2014 FIFA World Cup qualification against Honduras. On 8 October, he scored a 95th-minute equaliser for Costa Rica against Honduras to send Costa Rica to the 2018 FIFA World Cup. While placed on the bench for the first two games of the FIFA world cup Kendall had a chance to play in the third match and was able to score off a header and gain his first World Cup goal.

All content from Kiddle encyclopedia articles (including the article images and facts) can be freely used under Attribution-ShareAlike license, unless stated otherwise. Cite this article:
Kendall Waston Facts for Kids. Kiddle Encyclopedia.