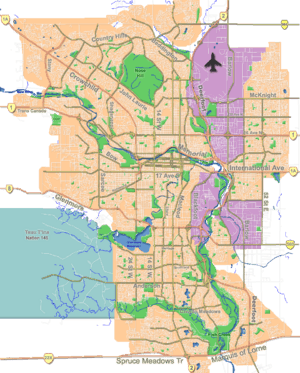 Kensington is a Business Revitalization Zone (BRZ) in Calgary, Alberta, focused around the intersection of Kensington Road and 10th St. NW, also known as the Kensington-Louise Crossing Business Association. It is located in the communities of Hillhurst and Sunnyside, immediately north of downtown and the Bow River, and is easily reached by most of the city's major access routes.

The Calgary C-Train (above ground light-rail transit system) runs through the Kensington area via Sunnyside Station. The station is located along 9A Street, between 3rd and 4th Avenue N.W.

Kensington is a lively area with many independent shops, restaurants and pubs. The BRZ hosts Christmas in Kensington Village in December, the Sun and Salsa Festival in July, as well as the Bizarre Bikes & Bazaar in May.

In 2017 and 2018 businesses in the Kensington area transformed themselves into shop replicating those seen in Diagon Alley from the Harry Potter series. The event takes place in July and is open to the public for free.

The surrounding Hillhurst area was owned by the Canadian Pacific Railway and pioneer rancher Ezra Riley at the beginning of the 20th century, when Riley Park was used for horse pasture. The oldest commercial buildings still standing date from before the First World War.

All content from Kiddle encyclopedia articles (including the article images and facts) can be freely used under Attribution-ShareAlike license, unless stated otherwise. Cite this article:
Kensington, Calgary Facts for Kids. Kiddle Encyclopedia.