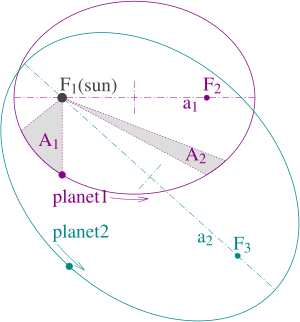 Figure 1: Illustration of Kepler's three laws with two planetary orbits.
(1) The orbits are ellipses, with focal points ƒ1 and ƒ2 for the first planet and ƒ1 and ƒ3 for the second planet. The Sun is placed in focal point ƒ1.

Johannes Kepler found these laws, between 1609 and 1619. Kepler's laws of planetary motion are three laws that describe the motion of planets around the sun:

Most planetary orbits are nearly circular, and careful observation and calculation are required in order to establish that they are not perfectly circular. Calculations of the orbit of Mars indicated an elliptical orbit. From this, Johannes Kepler concluded that other bodies in the Solar System, including those farther away from the Sun, also have elliptical orbits.

Kepler's work (published between 1609 and 1619) improved the heliocentric theory of Nicolaus Copernicus, explaining how the planets' speeds varied, and using elliptical orbits rather than circular orbits with epicycles.

Isaac Newton showed in 1687 that relationships like Kepler's would apply in the Solar System to a good approximation, as a consequence of his own laws of motion and law of universal gravitation.

All content from Kiddle encyclopedia articles (including the article images and facts) can be freely used under Attribution-ShareAlike license, unless stated otherwise. Cite this article:
Kepler's Laws Facts for Kids. Kiddle Encyclopedia.