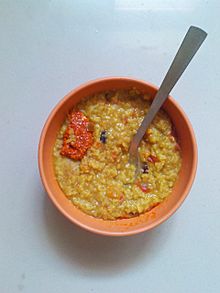 Khichdi, is a dish from the Indian subcontinent made from rice and lentils (dal), but other variations include bajra and mung dal kichri. In Indian culture, it is considered one of the first solid foods that babies eat. Kichri is a salty porridge. The Anglo-Indian dish Kedgeree is thought to derive from khichri. India has designated it as the "National dish", as it is being globally promoted by the Government of India as "Queen of all Foods".

All content from Kiddle encyclopedia articles (including the article images and facts) can be freely used under Attribution-ShareAlike license, unless stated otherwise. Cite this article:
Khichdi Facts for Kids. Kiddle Encyclopedia.