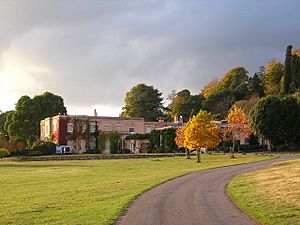 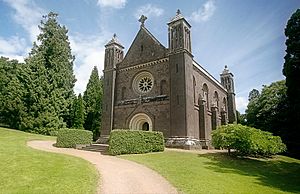 Killerton is an 18th-century house in Broadclyst, Exeter, Devon, England, which, with its hillside garden and estate, has been owned by the National Trust since 1944 and is open to the public. The National Trust displays the house as a comfortable home. On display in the house is a collection of 18th- to 20th-century costumes, originally known as the Paulise de Bush collection, shown in period rooms.

The estate covers some 2590 hectares (25.9 km2, 6400 acres). Included in the Estate is a steep wooded hillside with the remains of an Iron Age Hill fort on top of it, also known as Dolbury, which has also yielded evidence of Roman occupation, thought to be a possible fort or marching camp within the Hill fort.

The manor of Columb John in the parish of Broadclyst was purchased by Sir John Acland (d.1620), MP and High Sheriff of Devon. The adjoining estate of Killerton was purchased a short time thereafter from Sir Thomas Drewe (d.1651) of The Grange, Broadhembury, Sheriff of Devon in 1612, by his nephew Sir Arthur Acland (d.1610) of Acland in the parish of Landkey as jointure for his wife Eleanor Mallet. The present Georgian Killerton House was built by Sir Thomas Acland, 7th baronet in 1778. The chapel was built in 1738 to the designs of Charles Robert Cockerell.

The garden was created in the 1770s by John Veitch, one of the leading landscape designers of the time. It features rhododendrons, magnolias, herbaceous borders and rare trees, as well as an ice house and early 19th-century summer house. The surrounding parkland and woods offer a number of circular walks. Plans attributed to William Sawrey Gilpin (1762-1843) for a new drive from Killerton to Columbjohn (1820) were not implemented; a short play about of the meeting between Veitch and Gilpin was commissioned by The National Trust in the gardens of Killerton in mid 2016.

Killerton was given to the National Trust by British politician Sir Richard Dyke Acland, 15th Baronet, and in September 2015 The National Trust commissioned a short drama to be staged on the site entitled The Gift, written by Eileen Dillon, telling the story of Sir Richard's decision to hand over his estate.

In 2016 an archeological dig discovered what is believed to be a footprint of an intended replacement home to the current Killerton. Reports believe that this is what has been known in history as the lost house of Devon, of 240 years, designed by architect James Wyatt. It is a shortish walk from the current site, but still within the grounds, and its existence was obscured by a copse that looks to have been deliberately planted to hide it. Killerton have placed woodwork in all four corners of what they believe would have been the corners of the intended property above the footprints found. They have also placed a door and frame on what they believe would have been the entrance to the intended billiard room. Killerton’s information boards on the site state that there is an intention for further archeological digs in the future.

All content from Kiddle encyclopedia articles (including the article images and facts) can be freely used under Attribution-ShareAlike license, unless stated otherwise. Cite this article:
Killerton Facts for Kids. Kiddle Encyclopedia.