The surviving church dates to the mid-12th century, with the chancel extended c. 1200.

It was a traditional assembly site for pilgrims, who followed the Saint's Road (Casán na Naomh) northeast to Mount Brandon.

Some of the rituals carried out by locals, like performing nine clockwise circuits of the site on Easter Sunday, or the boring of holes in standing stones, suggest remnants of Celtic religion; Kilmalkedar may well have been a religious site long before Christianity arrived. 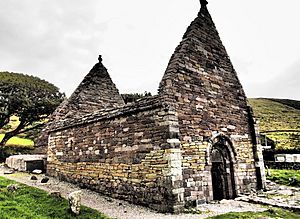 Pre-Romanesque remains include a corbelled building, perhaps a monastic cell; an alphabet stone; an Ogham stone; a sundial; a stone cross; and some bullauns. One of the bullauns is associated with the mythical cow Glas Gaibhnenn.

The alphabet stone is carved with "DNI" (domini) and the Latin alphabet in uncial script, carved c. AD 550–600. 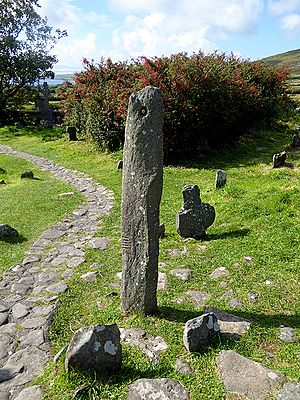 Ogham stone. The hole bored in the top is unique.

All content from Kiddle encyclopedia articles (including the article images and facts) can be freely used under Attribution-ShareAlike license, unless stated otherwise. Cite this article:
Kilmalkedar Facts for Kids. Kiddle Encyclopedia.