Southwest of the village are the Kilmory Cairns (including Torrylin Cairn), a set of Neolithic chambered cairns in which skeletal remains and a flint knife were found.

Kilmory is situated on the southern coast of the Isle of Arran. Visitors to Kilmory are drawn by the natural environment of the area, including a long beach. 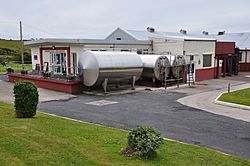 The village itself is no more than a few houses, a shop, a church, and a post office. At the East end of the village is the Torrylinn creamery, which produces Arran Dunlop, a silver medal winner in the British Cheese Awards 2002.

In early 2007, the village suffered a loss of amenities, with the village shop, tearoom and public bar all closing. The post office was relocated to the Public Hall and opens there from 10am to 3pm on Tuesdays and Wednesdays.

All content from Kiddle encyclopedia articles (including the article images and facts) can be freely used under Attribution-ShareAlike license, unless stated otherwise. Cite this article:
Kilmory, Arran Facts for Kids. Kiddle Encyclopedia.