Kinpurnie Hill is one of the most famous hills of the Sidlaw range in south-east Perthshire.

Kinpurnie Hill is located near Newtyle and is popular with hillwalkers. 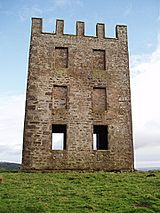 Atop the hill is Kinpurnie Tower, designed by Alexander Bryce (1713 - 1786), Minister of Kirknewton and East Calder and built by amateur astronomer James Stuart-Mackenzie in 1766 to be used as an observatory. It is 12 metres (39 ft) tall and is visible from the roadside.

It stands next to the site of an unfinished iron-age fort; remains of the vitrified walls and the large ditch can be seen in the area of the viewfinder and trig point. The viewfinder is useful for picking out the distant hills on a clear day.

The tower, which has walls 1 metre (3.3 ft) thick, fell into serious disrepair after it ceased to function as an observatory and faced demolition in the early 1970s. However, as it was such a well known landmark, plans were drawn up to restore the structure and the work, funded by the local authority and the Cayzer Estate, was completed in 1974.

All content from Kiddle encyclopedia articles (including the article images and facts) can be freely used under Attribution-ShareAlike license, unless stated otherwise. Cite this article:
Kinpurnie Hill Facts for Kids. Kiddle Encyclopedia.