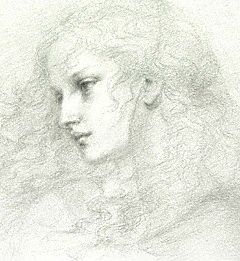 Kinuko Yamabe Craft was born in Kanazawa, Ishikawa Prefecture, Japan on January 3, 1940. She graduated with a Bachelor of Fine Arts in 1964 from the Kanazawa College of Art. After graduating, she came to the United States in 1964 to study at the School of the Art Institute of Chicago where she continued her studies in design and illustration. A majority of her earlier work was for the editorial and advertising market.

Craft illustrated the cover art of the older editions of Shakespeare's work for the Folger Library. She has a passionate love of European fine art and draws on a deep knowledge of European art history in creating her work. She is most inspired by the works of Leonardo da Vinci, the Pre-Raphaelites, and Symbolist painters. Her work is done with a combination of artist oils and watercolor on clayboard gesso panels.

Craft has illustrated eight picture books (fairy tale and classic mythology) designed for children and young readers. Since the mid-1990s, she has concentrated her efforts on art for fantasy book jackets. Her art has included paintings for the book covers of many well-known fantasy authors such as Patricia A. McKillip, Juliet Marillier, and Tanith Lee. She has also designed opera posters, fairy tale books and painted cover art for many national magazines such as Time, Newsweek, and National Geographic.

She has collaborated with many authors and worked with her husband Mahlon F. Craft and her daughter Marie Charlotte Craft. Her original paintings, drawings, and limited-edition prints are represented by Borsini-Burr Gallery in Montara, California, and other galleries.

Her art has been licensed on calendars, posters, greeting cards, and other consumer goods. Her fairy tale books are currently distributed in the USA, other English-speaking countries, Europe, Greece, China, and Korea. She has received numerous awards for her work, including several gold and silver medals from the Society of Illustrators, New York, NY. Ms. Craft’s work can be found in the collections of National Portrait Gallery (United States), the Museum of American Illustration in New York City, the National Geographic Society, and other corporate collections.

Craft has also lectured and given workshops at numerous art schools, universities, and organizations, including Art Center College of Art and Design, San Jose State University, Rhode Island School of Design, Philadelphia College of the Arts (2012), and more.

All content from Kiddle encyclopedia articles (including the article images and facts) can be freely used under Attribution-ShareAlike license, unless stated otherwise. Cite this article:
Kinuko Y. Craft Facts for Kids. Kiddle Encyclopedia.