Kioloa is a small hamlet located on the South Coast of New South Wales, Australia and is within the City of Shoalhaven local government area. It is pronounced by locals as 'Ky-ola'. At the 2016 census, Kioloa had a population of 257.

The Australian National University's Kioloa Coastal Campus is north of the town.

Its neighbour is Bawley Point, which is accessed via Murramarang Road, the only sealed access road in and out of Kioloa. Both of these villages rely mainly upon tourism as a source of income. Kioloa has three large caravan parks offering a range of accommodation options to suit all budgets and one general store. The area is well known throughout the region for its pristine beaches and peak surfing conditions. As an isolated coastal retreat, Kioloa is infamous among holiday-goers for its lack of mobile phone reception and its large peaceful rays. 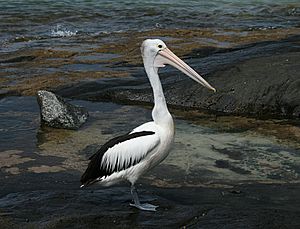 Local pelicans collect the fish scraps around the boat ramp.

All content from Kiddle encyclopedia articles (including the article images and facts) can be freely used under Attribution-ShareAlike license, unless stated otherwise. Cite this article:
Kioloa, New South Wales Facts for Kids. Kiddle Encyclopedia.