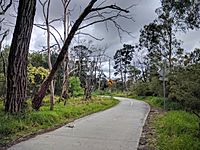 Koomba Park is one of the parks comprising the Dandenong Valley Parklands in the eastern suburbs of Melbourne, Australia. It consists of 92 hectares (230 acres) of which 33 hectares (82 acres) are publicly accessible, and is bounded by Dandenong Creek, Boronia Road, EastLink, Mountain Highway and Burwood Highway in a clockwise direction. It is managed primarily by VicRoads and Parks Victoria. The park opened in December 1981, and its land was previously used for cattle grazing and apple orchards. The surrounding area is still used for grazing. There are three major power transmission lines running through the park: Rowville-Templestowe Single Circuit Southern (1st and 2nd), and Rowville-Ringwood.

In 2019, a study found that Koomba Park was one of the least used areas of the Dandenong Valley Parklands, and also garnered the least satisfaction from park users when compared to Jells Park and Tirhatuan Park.

The park forms part of the wildlife corridor of Dandenong Creek, and contains a large amount of riparian forest, as well as wetlands and swamps and some areas of indigenous revegetation. Common mammals in the park include various species of bats, possums, and sugar gliders. There is a bird hide adjacent to one of the ponds, from which many species of native birds are observable. The park also provides habitat to a variety of indigenous plant species, many of which are threatened or endangered. Koomba Park has several man-made water bodies, and is classified in the Urban Floodway Zone since it is prone to inundation.

Koomba Park constitutes part of the Opperman Trails, a tribute to cyclist Sir Hubert Opperman. The Lands End Trail is signposted through the park, including an information board about Opperman.

There are also a series of official fine course gravel criss-crossing paths which are located in the park designed for walkers, although can be used by cyclists. These paths are usually very poorly maintained, with sections bumpy, narrow and even impassable due to overgrowth and fallen trees. A number of unofficial paths have also been created by visitors in the park.

Koommba Park has a large carpark at the southern end, on a service road off Burwood Highway, which is shared with Wantirna Reserve. There is another smaller carpark at the northern end off Boronia Road. A joint picnic shelter and toilet block (which was originally a sports pavilion) existed in the park for some time, but was demolished in mid 2008 due to numerous crime incidents. Electric barbecues were also removed at the same time. Information boards are located at the north and south pedestrian entrances to the park. A drinking fountain is also located at the junction of Dandenong Creek Trail and EastLink Trail.

The adjoining Wantirna Reserve, managed by Knox City Council and located at the southern end of the park, features a sporting oval with an adjacent clubhouse and cricket nets which caters for Australian rules football and cricket. The reserve also contains the Wantirna Tennis Club, as well as a scout hall and playground. All facilities are accessed by dirt roads with parking areas provided. The Victorian Jazz Archive is also located on the left side of the southern entrance to Koomba Park.

All content from Kiddle encyclopedia articles (including the article images and facts) can be freely used under Attribution-ShareAlike license, unless stated otherwise. Cite this article:
Koomba Park Facts for Kids. Kiddle Encyclopedia.