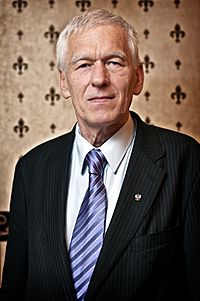 Kornel Andrzej Morawiecki (3 May 1941 – 30 September 2019) was a Polish politician and theoretical physicist. He was born in Warsaw. Morawiecki was the founder and leader of Fighting Solidarity (Polish: Solidarność Walcząca). He was also a member of the 8th legislature of the Sejm, of which was also the Senior Marshal from 12 November 2015 until his death.

He was one of the candidates in the 2010 Polish presidential election, but received only 0.13% of the vote and did not make it into the second round.

His son Mateusz Morawiecki is the Prime Minister of Poland.

Morawiecki died on 30 September 2019 of pancreatic cancer in Warsaw at the age of 78.

All content from Kiddle encyclopedia articles (including the article images and facts) can be freely used under Attribution-ShareAlike license, unless stated otherwise. Cite this article:
Kornel Morawiecki Facts for Kids. Kiddle Encyclopedia.