Kornwestheim is a town in Baden-Württemberg, Germany. It is the third largest town of the Ludwigsburg district, behind Ludwigsburg and Bietigheim Bissingen.

Since 1956, Kornwestheim has been an administrative district town in Baden-Württemberg.

Kornwestheim lies about 10 km in the north of Stuttgart. In the southwest Neckarbecken at the east edge of the Strohgäus within the Langes Feld. In the town, the Gänsbach flows east towards the Neckar. 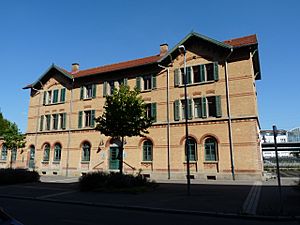 Kornwestheim can look back at a history of more than 1200 years. It was first mentioned in official documents around 780 AC. Archeological findings furnish evidence for the populating of the area in already prehistorical times.

There was a Roman road that lead through the Kornwestheim urban area, which has been partially preserved as dirt road. Part of it was restored. In the western part of the city there was an even older road from the Bronze Age running towards what today is a highway. 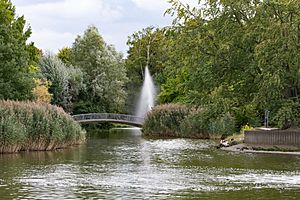 The municipality of Kornwestheim consists of the town centre and Pattonville. The latter became a part of Kornwestheim only at the beginning of the 1990s, having belonged to the Gemarkung Aldingen initially. The settlement was established in 1954 by the US army. After their departure a Company bought the area from the Federal Republic of Germany and divided it between the towns of Kornwestheim and Remseck am Neckar.

Pattonville has since been converted from a military to a civilian settlement.

The tower of Kornwestheim's town hall was built in the year 1935 by the architect Paul Bonatz. It serves not only as town hall tower, but also as water tower with a container of 800 cubic meters volumes and as clock tower.

All content from Kiddle encyclopedia articles (including the article images and facts) can be freely used under Attribution-ShareAlike license, unless stated otherwise. Cite this article:
Kornwestheim Facts for Kids. Kiddle Encyclopedia.