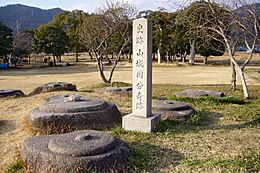 Kuni-kyō (恭仁京code: ja is deprecated ), also called Kuni no miyako, was an ancient Imperial capital of Japan between 740 and 744. It was in present-day Kizugawa in Kyoto Prefecture.

The new capital of Emperor Shōmu was built by Tachibana no Moroe.

The palace (Kuni no miya) was built in the former Yamashiro Province. in what became the town Kizu.

The city of Kuni-kyō was not completed. The court and capital moved to Naniwa-kyō (Osaka) after only four years.

Studies of the archaeological site suggest the location of the main buildings. The city was laid out in a grid. The area of palace is estimated to have been 500+ meters wide and 700+ meters long.

All content from Kiddle encyclopedia articles (including the article images and facts) can be freely used under Attribution-ShareAlike license, unless stated otherwise. Cite this article:
Kuni-kyō Facts for Kids. Kiddle Encyclopedia.