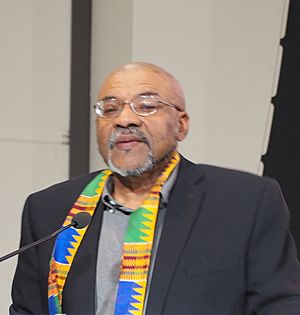 Dawes was raised in Jamaica. He now lives in Nebraska where he is the editor of Prairie Schooner.

His poetry relates to the Reggae music. He wrote a book called Bob Marley: Lyrical Genius (2007).

Dawes also reported on HIV/AIDS in Jamaica and Haiti after the earthquake (2012).

All content from Kiddle encyclopedia articles (including the article images and facts) can be freely used under Attribution-ShareAlike license, unless stated otherwise. Cite this article:
Kwame Dawes Facts for Kids. Kiddle Encyclopedia.