William Kyle Carpenter (born October 17, 1989) is a medically retired United States Marine who received the United States' highest military honor, the Medal of Honor, for his actions in Marjah, Helmand Province, Afghanistan in 2010. Carpenter is the youngest living Medal of Honor recipient.

Carpenter was born in Jackson, Mississippi on October 17, 1989, and raised in Flowood by his parents James and Robin. He is a graduate of W.W. King Academy in Batesburg, SC. He enlisted in the Marine Corps' delayed entry program at age 19 in February 2009, and completed Recruit Training in July 2009 at Marine Corps Recruit Depot, Parris Island, South Carolina.

In 2019, Carpenter co-authored a book with Don Yaeger titled You Are Worth It: Building a Life Worth Fighting For about Kyle's the events leading up to his becoming a Medal of Honor recipient. 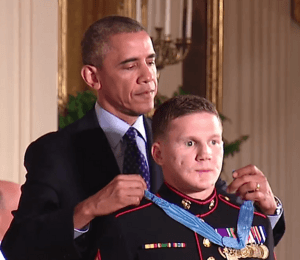 On November 21, 2010, Carpenter and another Marine, Nick Eufrazio, were manning a rooftop security post during defense of the village of Marjah, Helmand Province from a Taliban attack. According to his Medal of Honor citation,

The enemy initiated a daylight attack with hand grenades, one of which landed inside their sandbagged position. Without hesitation and with complete disregard for his own safety, Lance Corporal Carpenter moved toward the grenade in an attempt to shield his fellow Marine from the deadly blast. When the grenade detonated, his body absorbed the brunt of the blast, severely wounding him, but saving the life of his fellow Marine.

Carpenter's jaw and right arm were shattered, and he lost his right eye and most of his teeth; he has undergone dozens of surgeries. In July 2013, he was medically retired as a Corporal.

Carpenter appeared in a video, "Still in the Fight," to raise money for the Fisher House Foundation, which provides free and low-cost housing to veterans and families receiving treatment at military hospitals.

All content from Kiddle encyclopedia articles (including the article images and facts) can be freely used under Attribution-ShareAlike license, unless stated otherwise. Cite this article:
Kyle Carpenter Facts for Kids. Kiddle Encyclopedia.