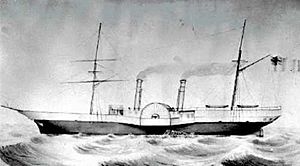 The Labouchere was a paddle steamer in the service of the Hudson's Bay Company, built in 1858 at Green's in Blackwall, London, England. Under the command of Captain J. Trivett it was mostly in service in British Columbia and the rest of the Pacific Northwest in the 1850s and 1860s, including the Stikine lisière in Russian America. In 1859, its then-captain John Swanson was elected by a "celebrated" majority of one (there was only one qualified elector) in the colonial riding of Nanaimo for the Legislative Assembly of the Colony of Vancouver Island.

By 1865-66 the Labouchere served the San Francisco to Victoria run. On its second run on that route, under the command of W.A. Mouat and carrying 100 passengers and cargo on behalf of Faulkner, Bell & Co., the Labouchere was grounded in heavy fog off Point Reyes after disembarking San Francisco on 14 April 1866 and, after backing off the reef and staying offshore overnight, sank on the morning of the 15th. One of eight lifeboats was swamped, incurring the loss of two lives. Those in the lifeboats were picked up by Rescue ; 23 men who had stayed on board were rescued by the Italian fishing vessel Andrew just before the Labouchere sank beneath the waves.

All content from Kiddle encyclopedia articles (including the article images and facts) can be freely used under Attribution-ShareAlike license, unless stated otherwise. Cite this article:
Labouchere (paddle steamer) Facts for Kids. Kiddle Encyclopedia.