Kids Encyclopedia Facts
In this Chinese name, the family name is Lai (Li).

Lai Man-Wai (Chinese: 黎民偉; pinyin: Li Minwei; 1893–1953), also romanised as Lay Min Wei or M.W. Ray, considered the "Father of Hong Kong Cinema", was the director of the first Hong Kong film Zhuangzi Tests His Wife in 1913. In the film, Lai played the role of the wife, partly due to the reluctance of women to participate in show business at the time. 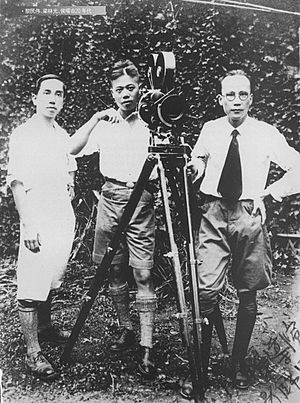 Born in Japan, of Xinhui, Guangdong origin and raised in Hong Kong, he joined Sun Yat-sen's Kuomintang party in 1911 and helped make anti-warlord movies. He was an active director during the golden years of the Shanghai movie industry from 1921 to 1928. In 1923, he founded the China Sun Motion Picture Company with his brother, Lai Pak-Hoi, in Hong Kong which later relocated to Shanghai. In 1930, he co-founded one of the "Big Three" studios of the 1930s, Lianhua Film Company, with Lo Ming Yau. Lianhua, together with other leading Shanghai studios, was destroyed when the Empire of Japan attacked Shanghai in 1937. Lai returned to Hong Kong in 1938 and retired.

He was married to Lim Cho Cho, a Vancouver-born actress. His daughter Lai Suen and granddaughter Gigi Lai are both actresses.

His story was documented in Lai Man-wai: Father of Hong Kong Cinema by Choi Kai-kwong in 2001.

All content from Kiddle encyclopedia articles (including the article images and facts) can be freely used under Attribution-ShareAlike license, unless stated otherwise. Cite this article:
Lai Man-Wai Facts for Kids. Kiddle Encyclopedia.