Lake Ainslie on Cape Breton Island is the largest natural freshwater lake in Nova Scotia. The Southwest Margaree River starts at the lake and empties into the Gulf of Saint Lawrence. The lake is approximately 20 km long and averages 5 km in width. 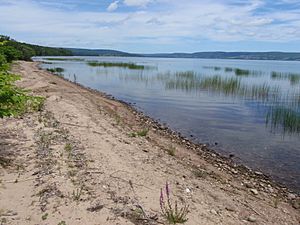 Lake Ainslie was formed during the Pleistocene Epoch, about two million years ago, when glacial outwash blocked the drainage of the valley of Loch Ban. It is underlain primarily by sedimentary deposits of the Horton and Windsor Formations, dating back about 350 million years.

A number of bald eagles nest around the lake.

The lake was named after George Robert Ainslie, the Lieutenant Governor of Cape Breton Island from 1816 to 1820, when Cape Breton became part of Nova Scotia.

All content from Kiddle encyclopedia articles (including the article images and facts) can be freely used under Attribution-ShareAlike license, unless stated otherwise. Cite this article:
Lake Ainslie Facts for Kids. Kiddle Encyclopedia.