Lake Dolores Waterpark is an abandoned waterpark off Interstate 15 in the Mojave Desert in the community of Newberry Springs, California, United States. The waterpark had operated under numerous names in the past, including Lake Dolores, Rock–A–Hoola Waterpark, and Discovery Waterpark.

The park was originally designed and built by local businessman Bob Byers for use by his extended family. Lake Dolores was named after Byers' wife.

The initial phases of conception, planning and construction took place in the late 1950s and early 1960s. An expanse of arid land on the eastern edge of the Mojave Desert 100 yards (91 m) from Interstate 15 was chosen for the project. The area contains underground springs fed by the Mojave Aquifer. Lake Dolores, the body of water, is a 273-acre (110 ha) man-made lake fed by underground springs.

In May 1962 a basic campground adjacent to the small lake was opened to the public. Enthusiasts of motocross and people traveling on Interstate 15 between Los Angeles and Las Vegas gave the campground some business.

Over the next 25 years, rides and attractions were added, and the site evolved into a waterpark, which was advertised on television with the slogan "The Fun Spot of The Desert!"

The park featured eight identical 150-foot (46 m) sixty–degree–angle steel waterslides mounted side by side on a man–made hill. Riders rode on small plastic "floaties" which skimmed 40 to 50 yards (37 to 46 m) across the lagoon when they hit the water at the slide's end.

Nearby were two V–shaped waterslides, also roughly 150 feet (46 m) long, which were ridden standing up. The slides ended about 15 feet (4.6 m) above the water, shooting the standing rider out of the end like a human cannonball.

On the "Zip–Cord" ride, riders hung from a hand–held device attached to a guide wire for approximately 200 feet (61 m) at a 30–degree downward angle. At the end of this wire the hand–grip would slam into a blocking mechanism and come to a stop about 20 feet (6.1 m) above the water, with the momentum thrusting the hanging rider 20 feet (6.1 m) forward into the lagoon.

In the middle of a smaller adjacent lake were three high diving boards, and three trapeze-like swings hanging from an A–frame structure mounted on a 20-foot (6.1 m) high platform. Riders launched themselves from these swings into the lake.

The "Big Bopper" was a fast, long group raft ride. The "Lazy River" was a slower and more relaxed raft ride. There were also bumper boats, an oval JetSki water racetrack, and a swimming pool.

The park saw its peak attendance between the early 1970s and the mid-1980s. After a downturn in popularity in the late 1980s, the park closed.

In 1995, the original water slides were removed and replaced with more modern fiberglass slides and were painted red, white and blue in reference to the United States flag. Advertising and promotion was contracted to Beachport Entertainment Corporation, and the park reopened under a new name, "Rock–A–Hoola", on July 4, 1998. The new park featured the constant playing of 1950s and 1960s rock and roll music throughout the park along with some compatible graphics. In its "Rock–A–Hoola" incarnation, the park included a river ride on inflated tubes.

An on–premises RV park had been planned but its opening was delayed. In its three seasons the park amassed three million dollars in debt, one of the three investors experienced financial problems, and an employee crippled in a 1999 accident was awarded $4.4 million in damages (affirmed by the California Fourth District Court of Appeal in 2004). The park filed for Chapter 11 bankruptcy in February 2000.

The court–appointed trustee failed to find a buyer, and in August 2000 the bankruptcy filing was changed to Chapter 7 liquidation. The bankruptcy judge overseeing the case returned the property to Dolores Byers (husband Bob Byers died in 1996) with most debts discharged.

Dolores Byers sold the property in September 2001 to S.L. Investment Group LLC of the City of Industry, California. She died a month later.

After a US$400,000 renovation the waterpark reopened in May 2002 under a new name: Discovery Waterpark. In 2002 and 2003, the park was open on weekends. During the last season of operation in the summer of 2004, the park operated intermittently. The park has been closed since the summer of 2004. 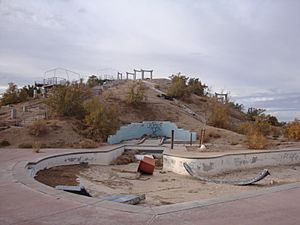 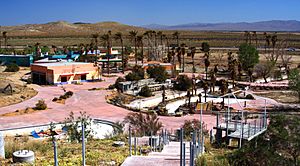 The remnants of Rock-A-Hoola Waterpark in the foreground, and Interstate 15 in the background.

In 2003, Olympic Gold Medalist and former professional football player Ron Brown and the Pro Players Network, a group of former and current professional athletes, formulated a proposal to purchase the park and turn it into a camp for disadvantaged youths, but this effort failed.

In 2009 some of the park installations were sold off. The Big Bopper and Thunder Road water slides were dismantled and shipped to Canada, where they were repainted light blue and renamed "Colossal Canyon" and "Zero-60 Raceway" at Cultus Lake Water Park in British Columbia. Repeatedly vandalized, the park fell into ruins. Much of the park was torn apart by people who salvaged metal and wires from the buildings. Urban explorers frequently visited the waterpark, ignoring the "no trespassing signs.

In March 2008 the park appeared in an episode of the reality show Rob & Big on MTV. Professional skateboarder Rob Dyrdek and friends used the waterpark and its slides to perform skateboard stunts for the show.

In 2011, a group called Oasis Themepark announced a project to renovate and reopen the park, but this effort failed.

In June 2012, another skate film Kilian Martin: Altered Route directed by Brett Novak and sponsored in part by Mercedes-Benz showed the park in its current state while reflecting on its past appearance.

In 2013, TrustoCorp, a group of artists from New York City, transformed the park into a "TrustoLand" as an artistic statement, by repainting many signs and buildings with unusual images and messages.

On May 27, 2013, Boards of Canada publicly debuted their album Tomorrow's Harvest by playing it first at Lake Dolores Waterpark. They had previously hinted that it would be played there by tweeting satellite images and uploading a video to YouTube featuring a distorted advertisement for the park titled Look Sad Reel, an anagram of Lake Dolores.

On September 30, 2014 The park was used by Top Gear America as an obstacle course in Season 5 Episode 7 "What Can It Take".

On November 7-9th, 2014 The park was used as the site of an Operation Lion Claws airsoft event,'War of Angels'.

On October 7, 2016, the park appeared on the TV show Abandoned, which airs on Viceland Network.

In mid-October 2018, the abandoned park was the victim of arson, and many of the remaining buildings, including the Lazy River Cafe and Arcade, were burned to the ground. After this, security officers were engaged to protect the property.

All content from Kiddle encyclopedia articles (including the article images and facts) can be freely used under Attribution-ShareAlike license, unless stated otherwise. Cite this article:
Lake Dolores Waterpark Facts for Kids. Kiddle Encyclopedia.