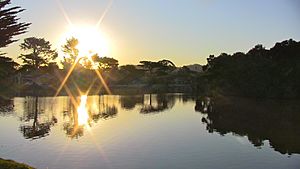 Lake El Estero is part of the building blocks of Monterey, California and has been classified as a citywide park. Originally a salt-water lagoon, its outlets to the bay were cut off because of over flooding. The 24.7-acre (100,000 m2) park has become an estuary to many migrating birds and ongoing improvements have been made into preserving the park. Today Lake El Estero not only draws in many eager adults for its beauty and history but attracts kids for its baseball diamond, skatepark, and world-famous Dennis the Menace Playground.

When El Estero was first discovered it was a lagoon filled with brackish water. Three major streams flowed into the lagoon. One stream went south to where San Carlos Cathedral currently is. The second went to the location of the County's courthouse. The final stream followed (today's) Del Monte Boulevard and flowed into the bay. In 1770 the first map of Lake El Estero was made by Miguel Costanso, a Spanish officer and engineer in the first expedition to California. The lagoon flooded constantly and in 1846 Walter Colton, a chaplain for the U.S. Navy, found a solution to the flooding problems. In his diary he wrote that “…it would be a good scheme to cut a channel between the two (the lagoon and the Bay)” (The Years in California, Walter Colton). In April 1874 the Monterey and Salinas Valley Railroad was built which permanently cut off the stream connecting El Estero to the Bay. This halted the flooding and turned the lagoon into the freshwater lake that we know today. From 1930 to 1931 efforts were made in turning the lake into an aquatic park. This was called the El Estero Development Project that was led by the City of Monterey. Eighty thousand cubic yards of mud were moved in its development. El Estero has been a popular resting spot for migrating birds and in 1933 the bird refuge was named after Harry Ashland Greene, who had a great impact in its development. Between 1938 and 1951 vast improvements were done to the park including “drudging and shoreline plantings (“Monterey City of Parks/ El Estero”)” and “two bridges connecting Pearl with Second and Fifth Streets (“Monterey City of Parks/ El Estero”)”. These new bridges connected downtown with the Oak Grove District. In 1984 the lake was drained in order to remove 6,000 truckloads of silt, which was clogging drains. People were also worried that there may be bacteria and bird droppings in the mud. Storm drains were rerouted so silt and mud would be dumped into smaller ponds. This allowed workers to remove it more easily.

Lake El Estero is an ecosystem that supports large amounts of life and is home to a countless number of birds, fish, and plants. Over 300 species of birds live in Lake El Estero Park. Many birds migrating south stop at the lake to rest such as the ring-billed gull, the western gull, the California gull, the mud hen, the black-crowned night heron, and the great blue heron. During the summer the brown pelican comes in from the south. Many ducks live there year-round such as the mallard. Many others find a home in Lake El Estero such as the ruddy duck, bufflehead duck, and Canada goose. Feeding the birds has been prohibited and they rely on local vegetation. Many other animals live in the waters of Lake El Estero, including the western pond turtle, Pacific tree frog, red-legged frog, crayfish, and several varieties of fish such as the tule perch, Sacramento perch, and Sacramento blackfish. There is a large amount of vegetation in Lake El Estero important to the many organisms that live there. The California Tule of California Bulrush provides a good nesting site for birds and its stems make a refuge for fish. Other commonly seen plants and trees are the Monterey cypress, the Monterey pine, the cattail, the coast live oak, the arroyo willow, and the yellow willow.

Other parts of El Estero Park

Many parks and attractions have been developed in El Estero Park to attract both tourists and locals. The most popular of these is the Dennis the Menace Playground. Designed by cartoon writer Hank Ketcham and with the help of sculptor Arch Garner, the park opened on November 17, 1956. With a variety of children's play areas, the park became a great success. One of these unique structures is the 1924 locomotive steam engine, donated by the Southern Pacific Railroad. In 1986 a thorough renovation of the park was done. The renovation was led by architect Richard Murray and cost at least $300,000. In this renovation a 30-ft tall rope swing was added along with other new playground equipment.

In 2006 a statue of the park's mascot, Dennis the Menace (U.S. comics), was stolen. The bronze statue was ripped from its place, and it is speculated that it might have been melted and sold. A replacement statue was given to the park on March 27, 2007. It was donated by Willis W. and Ethel M. Clark Foundation, founders of the California Test Bureau, now known as CTB McGraw Hill.

Other attractions in El Estero Park include the El Estero Ball Park, which is used by the Junior League, the Women's Soccer League, and other sport clubs, a dog park, and a skatepark, designed by 40 local skaters.

Directly across the lake from Dennis the Menace Playground is El Estero Boating. They have fiberglass paddleboats for rent to tour the lake for half hour or hour rides on regular style boats or large white swan boats. The boats carry up to 4-5 people, and a boat ride around the lake and its little island has been enjoyed by locals and tourists for several generations.

All content from Kiddle encyclopedia articles (including the article images and facts) can be freely used under Attribution-ShareAlike license, unless stated otherwise. Cite this article:
Lake El Estero Facts for Kids. Kiddle Encyclopedia.